(Bloomberg) — China and South Korea have asked Japan to join them in relaxing controls on business travel, the Yomiuri newspaper reported. Australia’s Trade Minister Simon Birmingham has yet to receive a call back from his Chinese counterpart after reaching out to Beijing about an anti-dumping probe into barley exports. Britain will build a vaccine center that will open a year ahead of schedule.

Brazil overtook Spain to rank fourth in the world for infections. Italy is taking a “calculated risk,” the premier said, in speeding up the reopening of the nation. Fiat Chrysler Automobiles is seeking an Italian-backed credit line.

China and South Korea have asked Japan to join them in relaxing controls on business travel as virus cases tail off, the Yomiuri newspaper reported. Japan remains reluctant to loosen what are currently some of the tightest border controls in the developed world, which were introduced over the past few weeks in a bid to help contain the coronavirus.

Singapore will this week lay out how it intends to roll back restrictions that had been imposed under a partial lockdown put in place since early April. Officials have said any lifting of restrictions will be done in a gradual and calibrated manner. Here’s a look at their options.

Of China’s five new cases, two were imported and three were locally transmitted, according to a statement form National Health Commission. The three cases are all from Fengman district, the hardest-hit area of of Jilin city. The risk level of Fengman District in Jilin City was adjusted from medium risk to high risk, according to a statement from Jilin Province, which is next to North Korea.

Australia Says China Yet to Respond to Call Over Barley Probe (8:30 a.m. HK)

Australia’s trade minister said an official response was filed with China over the investigation. He reiterated the government’s stance that Australia’s barley farmers operate without any trade-distorting subsidies and price their products in an entirely commercial way, Birmingham said on the Australian Broadcasting Corp.’s Insiders program.

The probe into the barley exports to China, worth A$1.4 billion ($898 million) in 2017, is seen by many in Australia as part of Beijing’s response to the government’s call for an independent investigation into the origins of the coronavirus outbreak that started in Wuhan.

Venezuela reported 45 new coronavirus cases in the last 24 hours for a total of 504, Vice-President Delcy Rodriguez said on state television. 34 of the new cases were imported from Peru, Colombia, Brazil and Ecuador, Rodriguez says.

Prime Minister Boris Johnson said Britain may not be free of the virus “for some time to come,” an admission that highlights the challenge he has of convincing people to return to work as the death toll remains the highest in Europe.

In an op-ed for The Mail on Sunday, Johnson said his government will spend 93 million pounds ($113 million) on a vaccine research center in Oxfordshire that will open in summer 2021, a year ahead of schedule.

Under pressure from his own Conservative Party to revive an economy plunging toward recession, Johnson is trying to encourage a skeptical electorate that they should return to offices and, particularly, send their children back to primary schools next month.

Brazil had 14,919 new cases, raising the total to 233,142, overtaking Spain to rank fourth in the world behind the U.S., Russia and the U.K., according to the Johns Hopkins University dashboard. The nation had 816 new deaths, raising the fatality toll to 15,633.

Vice President Hamilton Mourao and his wife are in self isolation after a civil servant he was in contact with tested positive for the coronavirus, his press office said in a note. Mourao and his wife have been tested and are awaiting results, which are expected on Monday.

When asked if rates could go turn negative, Haldane said “it’s something we’ll need to look at — are looking at — with somewhat greater immediacy,” according to the Telegraph. He said there are other options, such as expanding the bank’s bond purchases.

Haldane said the U.K. is heading toward an unemployment crisis comparable to the one it experienced in the early 1980s.

Fiat Chrysler Automobiles NV is seeking an Italy-backed credit line of as much as 6.3 billion euros ($6.8 billion) to buttress finances amid a steep downturn triggered by the pandemic.

The Italian unit is in talks with Intesa Sanpaolo SpA as lead lender, the company said in a stock exchange filing. Bloomberg reported the discussions on Friday. The company said it’s discussing a three-year credit facility.

The credit line would be “dedicated exclusively to financing FCA’s activities in Italy” and support about 10,000 supply-chain enterprises after plants reopened in April, according to the statement. The Italian-American carmaker burned through $5.5 billion in the first quarter while its North American plants were shuttered and new-car demand stalled.

France reported a second-straight daily drop in deaths after fatalities rose to a two-week high on May 14, while hospitalizations and the number of patients in intensive care continued to decline. The health ministry said deaths rose by 96 to 27,625.

The Federal Reserve had $40.6 billion in U.S. Paycheck Protection Program loans on its balance sheet, according to a spreadsheet that showed more than 3,000 individual advances by regional Fed banks to U.S. lenders providing the aid to small businesses.

A state breakdown shows that as of May 6, the most recent date for which loan details were provided, lenders in Utah and California received the most money, about $2.96 billion each. New Jersey had $2.5 billion and Wisconsin $1.75 billion. New York, the nation’s fourth most populous state, got just $804 million.

U.S. cases increased 1.8% from the same time Friday, to 1.46 million, according to data collected by Johns Hopkins University and Bloomberg News. The rise in cases was above the average daily increase of 1.7% over the past week. Deaths rose 1.7% to 88,211.

Loosening rules on fishing and rentals is part of Murphy’s “deliberate incremental steps” to bring the state’s economy back from a shelter-in-place order. A patch work of activities are now permitted in the Garden State: golf, for example, but not tennis.

Most medical indicators across the state’s northern, central and southern regions are “moving in the right directions,” he said.

South Africa reported 831 new infections on Saturday, its biggest daily increase, bringing the total to 14,355. Western Cape, home to the city of Cape Town, now has more than half of the cases nationwide and together with the Eastern Cape contributed 91% of new infections, according to the Health Ministry.

Western Cape authorities attributed the surge to rigorous testing, even as the province is facing clusters of infections in households, workplaces and supermarkets. About 18,000 tests were conducted in the past 24 hours. Deaths climbed by 14 to 261.

Conte forged an agreement with regional governors to pave the way for relaxing rules that have crippled the euro area’s third-biggest economy. “We are taking a calculated risk, aware that the contagion curve could rise again,” Conte told reporters at his Rome residence.

Businesses including shops, bars, restaurants and barbers can open on a regional basis, and Italians will be able to move within their own region from Monday. Italy will unlock its borders and allow citizens to move across the country starting June 3.

The increase in daily cases has exceeded 100,000 for the first time, according to data from Johns Hopkins University. New cases climbed by 100,200 on Friday, the fourth straight day of gains, according to the data.

Russia expects airline flights to fall 50-75% this year and rail cargo volumes to drop by 11% as a result of the pandemic, Interfax newswire reported citing country’s transport minister Yevgeny Ditrikh. Russia has the second-most infections after the U.S. at 272,043.

New York Governor Andrew Cuomo said state-run horse tracks and the Watkins Glen International track will reopen on June 1, but without people watching from the stands.

Nascar stages a competition at Watkins Glen in the Finger Lakes region in mid-August and state officials said races can be run as long as the staff follow safety guidelines.

“It’s a lot of reward for minimal risk,” Cuomo said at his daily briefing. “We can open Watkins Glen, that is in our control.”

The state reported 157 new deaths, the sixth straight day the figure was below 200, Cuomo said.

Mapping the Coronavirus Outbreak Across the World (7) 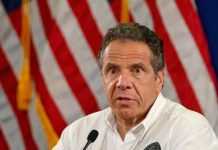