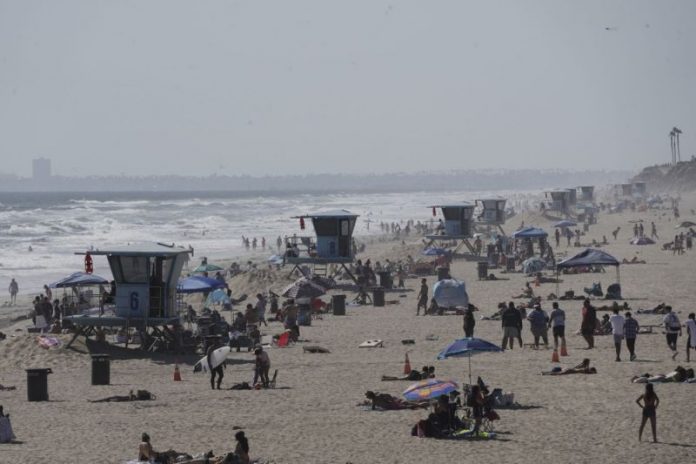 (Bloomberg) — Brazil’s death toll from the coronavirus surpassed 50,000, while cases across the U.S. Sun Belt surged.

Beijing reported only nine new infections, in a sign that a recent outbreak is coming under control, while South Korea saw the smallest daily increase in about a month. China blocked poultry from a Tyson Foods plant where many workers tested positive.

At a Saturday rally, U.S. President Donald Trump called the Covid-19 disease “Kung flu,” a racist slur. Trump’s comment that he urged staff to “slow the testing down” was a joke, his trade adviser said.

Mexico reported 1,044 coronavirus deaths Sunday, the second-highest daily fatality toll from the pandemic, according to data from the Ministry of Health.

A total of 21,825 have died from the Covid-19 outbreak, which has infected 180,545 in the country, the data showed. The rise in deaths doesn’t reflect only those that occurred in the previous 24 hours, as it can take longer for the ministry to compile data on coronavirus fatalities.

South Korea reported 17 more coronavirus cases in 24 hours, the smallest increase in about a month. The daily count brings the total number of infections to 12,438, data from the Korea Centers for Disease Control & Prevention showed.

Hong Kong has seen a jump in Covid-19 cases, with about 30 people testing positive, according to Radio Television Hong Kong, citing unnamed sources. The new cases are believed to be imported, with most of them from Pakistan and India, RTHK reported. If confirmed, it would be the largest single-day increase in cases since April 3.

Beijing reported only nine new coronavirus infections, in a sign that a recent outbreak is coming under control. The daily count fell to the single digits for the first time since the flareup began June 11.

The government last week declared that the peak has passed for the outbreak, the country’s worst since Wuhan, the city where the pathogen first appeared. The cluster emerged in Beijing’s biggest wholesale market, and has infected at least 236 people. Beijing set in place a partial lockdown, closing schools and putting housing compounds under strict control while thousands of flights were canceled.

Australia’s second-most populous state has tightened coronavirus controls as a spike in cases triggers fears the nation could be hit by a second wave of infections.

Victoria extended a state of emergency by four weeks to July 20, halved the number of visitors allowed in homes to five and delayed a planned increase in the size of gatherings in cafes, restaurants and pubs.

Australia has managed to limit the total number of coronavirus cases to 7,460 by closing international and state borders, quarantining returning residents, social distancing measures and a widespread testing and tracing regime. But concerns are growing about community transmission in Victoria, responsible for 116 new cases in the past week — 83% of the national total.

London City Airport reopened for passenger flights Sunday after a three-month shutdown, according to a statement by the airport. New safety features include temperature checks, signs and floor markings to help with social distancing and crowd-tracking technology so staff can monitor and direct passengers in large crowds to quieter areas. Passengers are also being asked to wear face masks.

Prime Minister Boris Johnson will set out which further parts of the U.K. economy can open in July, and give an update in Parliament on Tuesday after hearing conclusions of the review into England’s 2-meter (6 feet 7 inches) social distancing rule.

A week after the government encouraged its citizens to go shopping again, the country is on track to reopen additional parts of the economy including hospitality businesses, Health Secretary Matt Hancock said Sunday on Sky News. Any reduction in social distancing could be done with other measures such as wearing masks or using perspex screens in shops, he said.

The country’s pandemic alert level was lowered last week, with the virus no longer spreading exponentially after nearly three months of lockdown.

Brazil reported 17,304 new cases on Sunday, a 1.6% increase, bringing the total to 1.08 million, according to the States Health Secretaries known as Conass on its website. Deaths increased by 1.3% to 50,608, Conass said.

American Airlines Group Inc. braced its balance sheet with $3.5 billion in new financing as the pandemic cuts travel demand. The carrier sold $750 million of shares and the same amount of senior convertible notes due in 2025, according to a statement. American also will offer $1.5 billion in senior secured notes and said it will enter into a $500 million term loan facility.

American’s actions show the broad range of tools airlines are using to bolster balance sheets amid a hesitant return to flying that for now is led largely by leisure travelers anxious to escape months of confinement.

A demonstration in The Hague against actions by the Dutch government to rein in the coronavirus erupted in violence Sunday, prompting police to arrest 400 protesters, the Associated Press said.

Authorities said dozens of soccer fans arrived at the peaceful protest and began to clash with riot police near the central railway station. Police used officers on horseback and a water cannon to disperse the crowd after police were pelted with rocks and smoke bombs, AP said.

The protesters argue that a proposed law formalizing the coronavirus measures goes too far and is unconstitutional.

China’s suspension of imports from a Tyson Foods Inc. plant stoked concerns over the broader implications for U.S. and global meat exports during the pandemic.

All products from the facility in Springdale, Arkansas, where Tyson is based, that are about to arrive in China or are at ports will be seized by customs. The suspension announced Sunday reversed a decision a few days ago, when officials said food was unlikely to be responsible for a fresh virus outbreak in Beijing. Tyson on Friday said 13% of its workers tested positive for the virus at plants in northwest Arkansas.

The move is a potential new threat to meat plants that have seen slaughter disruptions because of the virus. In the U.S., hundreds of workers have become ill, and dozens have died. There’s also been a recent uptick in infections at facilities in Brazil and Germany.

The Americas region accounted for almost two-thirds of new cases reported by the World Health Organization on Sunday. The eastern Mediterranean region, including the Middle East, represented 10% and Europe had 9.8% of new infections, the WHO said.

The Americas also accounted for almost half of the 461,715 deaths tracked by the agency. The WHO total often lags behind tallies from John Hopkins University, which showed 465,475 deaths on Sunday.

President Donald Trump at his Oklahoma rally said health testing for the virus is a “double-edged sword,” so he urged staff to “slow the testing down,” a comment his trade adviser called a joke while his homeland security chief described it as a sign of frustration.

“That was tongue in cheek, please,” trade adviser Peter Navarro said on CNN’s “State of the Union. “It was a light moment, OK?” Navarro also said the government is filling the stockpile for a possible outbreak later this year. “I am not saying it’s going to happen, but of course you prepare it.”

Acting Homeland Security Secretary Chad Wolf on CBS’s “Face the Nation” said Trump was expressing “frustration” about tests and rising infections. “We’ve tested more than any other country in this world. Instead, the press and others, all they want to focus on is an increasing case count.”

Dubai will allow tourists into the Middle East business hub starting July 7 for the first time since the United Arab Emirates imposed travel restrictions to stem the outbreak.

The city also will allow residents stuck abroad to begin returning on Monday. Citizens and residents can resume outbound travel from June 23, according to a tweet.

Spain’s cases rose to 246,272 as the first visitors from the European Union and the U.K. entered the country as some travel restrictions were lifted.

In the past 24 hours, 141 infections were detected, the Health Ministry said on its website. A total of 29 deaths were reported in the past seven days, compared with 36 in Saturday’s seven-day tally, and the toll stands at 28,323.

Visitors from the EU, the Schengen area and the U.K. were able to enter Spain on Sunday after the government ended its state of emergency declared in March.

The U.S. lacks a clear plan for tracking the transmission of the coronavirus and to act to slow further spread, said Michael Osterholm, director for the Center for Infectious Disease Research and Policy at the University of Minnesota.

“We don’t have, even at a local level necessarily, the kind of plans that say, ‘this is what we’re going to do to get shut down transmission,’” he said on NBC’s “Meet the Press.” “It’s almost, in some ways, seems random.”

Governor Andrew Cuomo faulted the Trump administration’s response to the outbreak, which he described as a type of “schizophrenia” with many officials, including the president, minimizing the risks.

“This was a federal crisis, the federal government should step in, aggressively, and own it,” the New York governor said on CBS’s “Sunday Morning.” “In my state, I owned the situation for better or worse. It was always a schizophrenia from the federal government. They would help when pushed to help.”

Cuomo also said “it was a mistake” for Trump to decline to wear a mask, but pressed on whether it was the president’s mistake, he said: “The history books are going to have to decide.”

Initial studies suggest protests after George Floyd’s death haven’t seemed to increase the rate of spread of the coronavirus, but Tom Inglesby, director of the Johns Hopkins Center for Health Security, said it was too soon to rule out the events as a source of infections.

“We know from what we’ve seen so far in the last few months that outdoors is less of a risk than indoors and that mask use has a major impact,” he said on “Fox News Sunday.”

The rally for Donald Trump in Tulsa, Oklahoma, on Saturday is concerning, he said, because people were sitting close together, few wore masks and hands were being shaken without sanitizing. “All of those things will increase the risk of spread. We have seen in the past few months around the world that indoor gatherings have been the source of most super-spreading events.”