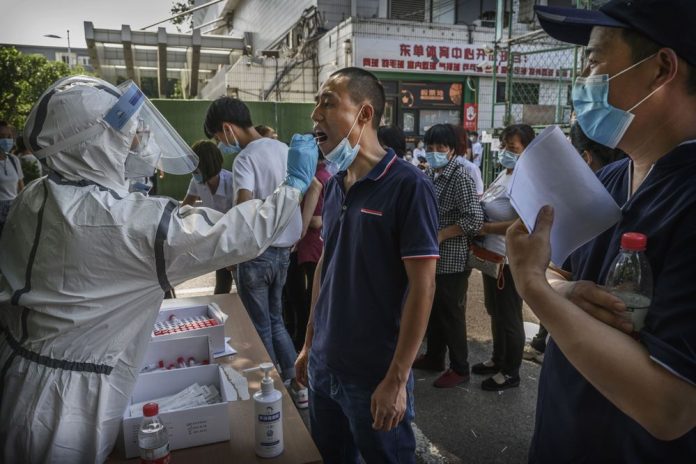 (Bloomberg) — Beijing has ordered all schools to close and imposed restrictions on visits to all residential compounds in an escalation of measures to halt a fresh outbreak. The Chinese capital city reported 31 local cases for Tuesday.

The Hong Kong-listed shares of Sinopharm Group Co. rose 6.8% on Wednesday after the Chinese drug maker said a Covid-19 vaccine candidate that is under development by its Wuhan Institute of Biological Products Co. has shown no serious adverse reactions during phase I/II clinical trials.

China reported 44 new coronavirus cases Tuesday, including 11 imported infections and 33 local cases, according to a statement from China’s National Health Commission. Beijing reported 31 local cases, while Hebei and Zhejiang each reported one case of local infection.

(Corrects time of government briefing to Tuesday, not Wednesday)

All residential compounds will “strictly” enforce so-called closed-off management, according to a report by official Beijing Daily posted on the city government website. Temperature checks and registration are required for entering residential compounds and those in areas with medium- and high-risk areas are barred from accepting visitors, according to a city government briefing Tuesday night. The city reported 31 new coronavirus cases for Tuesday.

Princess Cruise Lines Ltd. asked the Central District of California to dismiss emotional distress claims brought by passengers who sailed aboard the Grand Princess after at least two passengers on its prior journey showed symptoms of coronavirus.

“Mere anxiety or fear about their health” isn’t enough to support a claim for emotional distress in a fear of illness case, Princess told the U.S. District Court for the Central District of California Monday.

Citing a decades-old U.S. Supreme Court case, Princess said a plaintiff can’t recover for emotional distress stemming from potential exposure to a disease “unless, and until, he manifests symptoms of a disease.”

Japanese exports fell at a faster pace in May as the coronavirus froze demand from abroad and idled factories at home.

The value of shipments dropped 28.3% from a year earlier, the most since 2009 and exceeding April’s 21.9% drop, Ministry of Finance data showed Wednesday in Tokyo. Economists forecast a 26.1% fall. Exports have declined for 18 months, the longest streak since the 1980s.

“The FDA is not currently aware of any evidence to suggest that food produced in the United States or imported from countries affected by Covid-19 can transmit this respiratory virus,” the agency says in an emailed statement. The authority will continue to review all available science on the virus as the whole-of-government response continues to assess the virus that causes COVID-19”, it says.

Brazil, which trails only the U.S. in cases and deaths, reported a record 34,918 new infections, bringing the total to 923,189. The data compiled by Brazilian states also showed 1,282 new fatalities, pushing the total toll to 45,241.

The pandemic shows no signs of easing in Latin America’s largest nation as cases that were concentrated in capitals and the Southeast have spread inland and to poorer regions. At the same time, several states and cities have started to lift quarantine orders in the past few weeks, sparking concern about a new wave of infections. Estimates from PUC University in Rio de Janeiro show cases will likely surpass 1.3 million by late June, with more than 60,000 deaths.

Coronavirus cases in the U.S. increased by 20,405 from the same time yesterday to 2.12 million, according to data collected by Johns Hopkins University and Bloomberg News. The 1% increase was in line with the daily increase of 1.1% over the past seven days. Deaths rose 0.6% to 116,567.

Virus-related hospitalizations and deaths in New York continue to decline, Governor Andrew Cuomo said. There were 1,538 hospitalizations as of Monday, the lowest since the beginning of the outbreak, Cuomo said at a press briefing. The three-day average of daily fatalities also reached a low, at 24. The state has gone from the highest infection rate in the U.S. to the lowest, the governor said.

“The phased reopening is working,” Cuomo said. “Stay the course.”

The state recently completed an antibody test from May 1 to June 13 with 12,000 samples, Cuomo said. The tests showed that 13.4% of people tested positive for the antibodies, up a percentage point in that time, he said. New York City went from 19.9% to 21.6%, which he said is “not good” but “manageable.”

Salmon farmers have been hit by restrictions in China, where a new outbreak of the coronavirus was blamed on imported fish.

The red-fleshed fish is now being boycotted in China after new infections were traced back to the chopping board of a seller of imported salmon at a market in the capital. Orders have been canceled and “it’s difficult to ship fish to Beijing” in the near term, said Anders Snellingen, manager for global operations at the Seafood Council for Norway, the world’s biggest producer.

China still represents a small share of global salmon demand, making up less than 5% last year, but it’s also one of the fastest growing markets and fish farmers were already feeling the squeeze of pandemic restrictions.

Beijing has ordered all schools to close in an escalation of containment measures as it struggles to halt a new coronavirus outbreak which has already spread to neighboring provinces.

The Chinese capital on Tuesday raised its emergency response to level two and said that people will have to be tested for the virus before being allowed to leave the city. The city has also restricted movement in areas where new cases have been found. Taxis and cars from ride-hailing apps have been banned from leaving Beijing and passenger buses from some cities in nearby provinces have been halted. Trains and most other forms of transport to and from Beijing remain open.

The total reported number of infections in the city of more than 20 million has reached 106, according to the National Health Commission, while cases linked to the Beijing cluster have already been reported in two provinces in China’s northern region.

The U.S. National Institutes of Health will continue its clinical trial on the potential for hydroxychloroquine to treat patients hospitalized with Covid-19 despite regulators’ revoking the drug’s emergency authorization, the agency said in an email.

The NIH trial, called Orchid, began enrolling patients in April and is screening those who may be susceptible to erratic heart rhythms that are a risk associated with hydroxychloroquine. Data from a University of Oxford study led the Food and Drug Administration on Monday to determine hydroxychloroquine’s benefit no longer outweighed its cardiovascular risks.

A data and safety monitoring board will continue to monitor the trial, NIH said. The anti-malaria drug was touted by President Donald Trump as treatment for Covid-19.

A low-cost anti-inflammatory drug is the first treatment shown to improve survival in patients with Covid-19, University of Oxford researchers said.

Deaths in patients who needed assistance to breathe were lower over a period of four weeks when they got an anti-inflammatory called dexamethasone than among those who received standard care, the researchers said Tuesday in an emailed statement. The study was stopped early because of the important preliminary results.

The U.K. government has 200,000 courses of the drug “ready to go,” the BBC’s Laura Kuenssberg said in a tweet, citing an unidentified person in the government.

China’s customs authorities started testing all shipments of imported meat for the coronavirus, while officials in some major cities are also checking the products at domestic markets, after a fresh outbreak of the pathogen was linked to a wholesale seafood and meat market in Beijing.

Port authorities are conducting nucleic acid tests on all shipments of imported meat, said a trading executive with a major supplier, who asked not to be identified due to the sensitivity of the matter. Customs officials have also started testing every consignment within shipments, instead of just taking some samples, he said.

“It is troubling that some countries are using the pandemic to undermine liberal democracy to promote their own more authoritarian models,” Payne said in a speech in Canberra on Tuesday. She cited a European Union report that said foreign actors including Russia and China had spread misinformation, along with Twitter’s ban of accounts linked to alleged disinformation campaigns from China, Russia and Turkey.

“The disinformation we have seen contributes to a climate of fear and division when what we need is cooperation and understanding,” she said.