(Bloomberg) — U.S. daily coronavirus cases topped 50,000 for the first time ever with reopenings halted in areas including New York City and California. China recorded just one new case in Beijing as the nation appears to have brought the latest flareup under control.

U.S. cases continue to hit records amid increases in big states including Florida, Texas and California, while reopenings were pulled back and more local governments instituted mask requirements. Outbreaks at fraternities in Washington state and a mass quarantine of school principals south of San Francisco cast further doubts on school reopenings.

Japan found more than 100 new cases in Tokyo, exceeding that number for the first time since May 2 when the city was still in the midst of its state of emergency, NHK reported. Germany’s coronavirus infection rate remained below the key threshold of 1.0, and the number of new cases stayed much lower than the levels at the height of the outbreak.

More than 40 school principals in the South Bay are in quarantine after being exposed to Covid-19 during an in-person meeting held by the Santa Clara Unified School District, the San Francisco Chronicle reported.

Germany’s coronavirus infection rate remained below the key threshold of 1.0, and the number of new cases stayed much lower than the levels at the height of the outbreak.

The reproduction factor — or R value — edged higher to 0.86 on Wednesday from 0.83 the previous day, according to the latest estimate by the country’s health body, the Robert Koch Institute. The value remains far below its level last week, when local outbreaks and increased testing lifted the number as high as 2.88.

There were 475 new cases in the 24 hours through Thursday morning, up from 376 the previous day and bringing the total to 195,893, according to data from Johns Hopkins University. That compares with almost 7,000 at the peak of the pandemic in late March.

Thailand confirms six new coronavirus cases Thursday, all found in state quarantine after returning from Indonesia, South Africa and Sudan, according to Panprapa Yongtrakul, a spokeswoman for the Covid-19 center.

About 480,000 mostly younger Australian workers have drained their retirement savings accounts after the government allowed early access to alleviate financial hardship during the coronavirus outbreak, according to an industry group.

An estimated 395,000 people aged under 35 have eroded their retirement accounts, Industry Super Australia said on Thursday. The move could leave more people reliant on the government pension later in life, ISA says.

Manhattan home sales plunged the most on record in the second quarter as New York was shut down to prevent the spread of Covid-19.

Purchases of co-ops and condos in the borough tumbled 54% from a year earlier to 1,357, according to a report Thursday by appraiser Miller Samuel Inc.and brokerage Douglas Elliman Real Estate. It was the biggest annual decline since the firms started keeping the data in 1990.

Tokyo found more than 100 new cases of coronavirus on Thursday, exceeding that number for the first time since May 2, NHK reported, citing unidentified people.

Sri Trang Gloves (Thailand) Pcl, the nation’s largest glove maker, gained as much as 77% in the Thai stock exchange’s first listing since the novel coronavirus outbreak.

The medical-standard glove maker is expected to see a five-fold increase in profit this year as novel coronavirus boosts demand for its products, Jaroonpan Wattanawong, an analyst at Maybank Kim Eng Securities (Thailand) Pcl, wrote in note Wednesday.

U.S. daily cases rose above 50,000 for the first time ever on the first day of July, according to data from Johns Hopkins University and Bloomberg News.

The government will gradually lift border controls without compromising virus containment efforts, depending on Covid-19 situation globally and domestically, Mainland Affairs Council says on its website. Decision will be announced in a timely manner.

At least 80 students living in a dozen fraternity houses at the University of Washington campus tested positive, with hundreds of results pending, the Seattle Times reported.

Three fraternity residents had symptoms of COVID-19, and public health officials noticed a spike in cases from the area among people ages 18 to 20, said university spokeswoman Michelle Ma, according to the newspaper.

The House gave congressional approval Wednesday to extending the popular Paycheck Protection Program for small businesses until Aug. 8, hours after the deadline for applications lapsed with more than $130 billion still available.

The Senate passed the extension Tuesday, shortly before the Small Business Administration was to stop accepting new loan applications at 11:59 p.m. Both chambers used expedited procedures to send the bill to President Donald Trump, who was expected to sign it, according to a person familiar with the matter.

Victoria on Thursday said it had 77 new infections in the previous 24 hours, while most other states and territories have recorded few, if any, community transmissions for weeks.

The new infections means that Victoria has 415 active cases that its aware of, which state Chief Heath Officer Brett Sutton said on Thursday “means there are other infections still to be found out there and they’re all at risk of transmitting to others.”

Of the new cases 44 were locally infected, while 10 were imported. The death toll remained unchanged at 282.

China reported three new cases, including one in Beijing and two imported cases in Shanghai and Guangdong, according to a statement from China’s National Health Commission.

On Wednesday, the nation reported three local cases in Beijing, down from seven the day before. China has reported 83,537 confirmed coronavirus cases, and the total death toll now stands at 4,634.

Health authorities are investigating whether the breaches have contributed to a resurgence of coronavirus in the nation’s second-largest city.

Mexico’s Covid-19 deaths rose by 741 to reach 28,510, leading the country to overtake Spain and have the world’s sixth deadliest outbreak, according to data released by the Health Ministry Wednesday night.

Confirmed cases rose by 5,681 to 231,770. Deaths and cases in Mexico have increased steadily in recent weeks as Latin America has emerged as a hot spot for the pandemic. The country is also likely to soon overtake France, which has 29,864 deaths, according to data from Johns Hopkins University.

JetBlue Guarantees No Furloughs in Pilot Accord (7:53 a.m. HK)

JetBlue Airways Corp. agreed not to furlough any pilots involuntarily until May 1 in exchange for unspecified contract concessions designed to help the carrier cut expenses.

The deal doesn’t include changes to pay rates or significant modifications in work rules, the JetBlue unit of the Air Line Pilots Association said Wednesday in a letter to members. The union said it couldn’t yet disclose short-term changes in portions of its contract from October through April, which will return to normal earlier “if demand for flying recovers.”

BHP Group announced plans to scale back one of its copper mines in Chile, while unions in the country push for safer conditions as more workers fall ill. In the first mining cutback since Covid-19 infections began to explode in Chile six weeks ago, BHP said its Cerro Colorado operation will “significantly” reduce activities and trim its workforce.

Cerro Colorado is small and has a short mine life, but the decision stokes concerns over whether the top copper-producing nation can maintain output at high levels as the virus spreads.

Brazil delayed this year’s municipal elections by a month as the country struggles to control the coronavirus pandemic.

Brazil’s lower house of congress approved on Wednesday a constitutional amendment to postpone the first round of the election, initially scheduled to October, to November 15. Run-off votes will take place on November 29th. The proposal, which had already been approved by the Senate, is ready to be signed into law by the president of Congress.

Delivery staff at Brazil’s biggest mobile app providers staged a one-day nationwide walkout Wednesday to demand better working conditions and highlight the country’s increased dependence on the informal labor market. Demands by staffers for apps such as Uber Eats, Rappi, Loggi, and iFood include increased pay per delivery, benefits such as life insurance and coverage for on-the-job injuries, personal protective equipment during the pandemic, and meal vouchers.

President Donald Trump said he’d wear a mask if he were “in a tight situation with people” but that he’s not convinced they should be required even as coronavirus cases are spiking in parts of the U.S.

“I don’t know if you need mandatory,” Trump said Wednesday in a Fox Business Network interview. “I’m all for masks, I think masks are good.”

Trump has mocked his Democratic challenger, Joe Biden, for wearing a mask and hasn’t publicly worn one, though he is facing calls to do so. His comments come a day after Surgeon General Jerome Adams said: “Please, please, please wear a face covering when you go out in public.”

Trump added that Americans should “do what makes you feel good” and follow guidelines, and alluded in both interviews to wearing a face covering during a tour of a ventilator plant in Michigan. In that visit, he opted not to wear the covering in front of the media but was photographed masked during a private part of the tour.

McDonald’s Corp. is pausing the resumption of all dine-in services in its U.S. restaurants as the coronavirus outbreak flares up in areas across the country.

The halt will last for 21 days, the fast-food chain said in an internal letter that was viewed by Bloomberg. Locations that have already reopened their dining rooms should consult guidance from local and state officials on whether to roll back services, according to the letter, which was signed by Joe Erlinger, McDonald’s U.S. president, and Mark Salebra, head of the National Franchisee Leadership Alliance.

Miami-Dade County, Florida’s most populous, will start requiring masks in all public spaces.

Mayor Carlos Gimenez said he will sign an emergency order later Wednesday, according to an emailed statement. Masks were previously required in indoor public spaces and outdoors when effective social distancing was not possible.

Under the new rules, masks must be used outdoors “with few exceptions,” the statement said.

California Governor Gavin Newsom ordered the shutdown of indoor businesses including restaurants, bars, museums and movie theaters in 19 counties as the state grapples with a surge of infections from the coronavirus.

The areas affected include Los Angeles County, the hardest-hit part of the state, and in total account for about 70% of California’s population, Newsom said at a press briefing Wednesday. 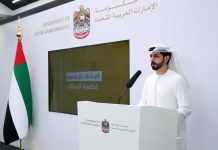 It is the duty of every citizen and resident to observe physical distancing: UAE Government 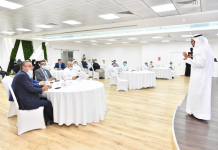