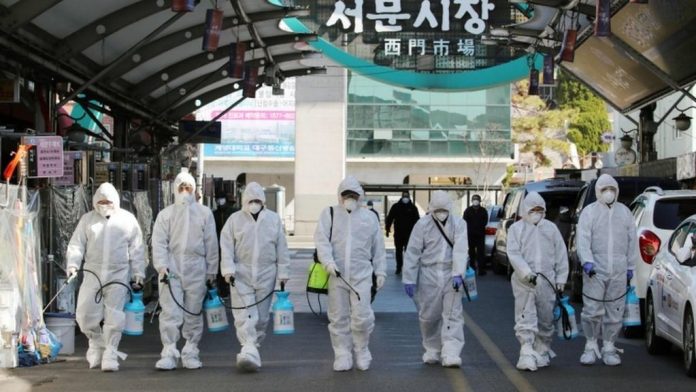 (Bloomberg) — The U.S. reached the grim milestone of 100,000 deaths from the coronavirus, the highest tally in the world. South Korea reported the most cases in seven weeks following an outbreak at a distribution center.

South Korea’s 69 cases from a warehouse run by e-commerce giant Coupang Corp., which is backed by Softbank Group Corp., underscore the challenges in permanently taming the illness in the absence of a viable vaccine.

Japan had fewer overall deaths in the first quarter even with the virus, and experts say masks have made a difference. Anthony Fauci, the U.S. government’s top infectious-disease expert, said there’s a “good chance” a vaccine may be deployable by November or December.

In Britain, Prime Minister Boris Johnson appealed to the U.K. to “move on” from the controversy over claims his top adviser broke lockdown rules. Brazil’s cases continued to soar, topping 411,000, the second most in the world after the U.S.

The Philippines is planning to further ease restrictions in the capital region starting June 1, which would allow most businesses and mass transport to resume.

The government’s task force on the coronavirus will recommend to President Rodrigo Duterte to shift Metro Manila to a general community quarantine until June 15, lifting strict stay-at-home orders except for the young and the elderly, Interior Secretary Eduardo Ano said in an interview with CNN Philippines.

A new set of daily activity gauges from Bloomberg Economics finds almost all of the economies it monitors witnessed a pick-up in activity since late March and early April, although no country is yet approaching its pre-virus levels. Germany, Japan and France are among those rebounding the fastest, while Spain and the U.K. remain relatively weak.

Mask-wearing — anathema to many in the U.S. — is one reason why Japan has avoided the heavy coronavirus death tolls seen in many parts of the world, according to the government’s expert panel on the pandemic.

While face-coverings have sparked angry confrontations in some parts of the world, and were initially dismissed as ineffective by the World Health Organization, they have long been part of everyday life in Japan. But they won’t be enough for the country to maintain its strong record on containing the virus.

Walt Disney Co. Chief Executive Officer Bob Chapek is planning to be more cautious than other theme-park operators in reopening attractions, saying he wants to take extra time to build trust with customers.

The company aims to begin admitting guests back in its parks in Florida in mid-July. Meanwhile, rivals such as Comcast Corp.’s Universal Studios and SeaWorld Entertainment Inc. plan to begin reopening their parks in the state early next month.

Even as countries try returning to some semblance of pre-pandemic life, ongoing restrictions are wearing thin a crucial human link in the global supply chain.

More than 200,000 seafarers stuck on merchant ships carrying everything from medical supplies to grain and oil are at increasing risk of mental and physical fatigue as port restrictions and canceled flights snarl the ability of vessels to change crews, according to the International Chamber of Shipping.

The U.S. surpassed 100,000 deaths from the coronavirus, according to Johns Hopkins University data. The milestone comes 126 days since the first case and 87 days since the Centers for Disease Control and Prevention announced the country’s first fatality, on Feb. 29 in Washington state.

Employers could bring workers back to office buildings more safely with steps including improving office ventilation, spacing workers apart and reducing shared objects like communal coffee pots, according to guidance from the CDC.

The recommendations issued Wednesday show how office life may change. Pre-packaged, single-serving beverages may replace water coolers. Open-plan offices could see staff coming in shifts and breaks staggered to minimize gatherings. Employees will likely wear masks and bosses may be much more involved in their workers’ health as daily health checks may be required to screen for illness.

The advice focuses heavily on office ventilation, recommending open windows and doors, HVAC units that use more outdoor air, increased air filtration and exhaust fans in restrooms. They’re phrased as suggestions rather than requirements and how many changes are made may depend on external factors, such as whether windows can even be opened.

Coronavirus cases in the U.S. increased 1.2% as compared to the same time yesterday, to 1.69 million, according to data collected by Johns Hopkins University and Bloomberg News. That was below the average daily increase of 1.4% over the past week.

New York Governor Andrew Cuomo again lobbied for federal funding for state and local governments coping with economic fallout from the pandemic. Speaking in Washington after meeting with President Donald Trump, the Democratic governor singled out Republican senators for calling any aid package a “blue state bailout.” Such a response is ugly and un-American, the governor said.

“There is no nation without the states,” Cuomo said. “They tend to forget that in this town.”

There can’t be a national economic recovery if state governments aren’t funded, especially New York, the nation’s financial capital, he said. New York pays more to the federal government than it takes in — $29 billion a year, he said.

New York Mayor Bill de Blasio says his city’s fiscal crisis has worsened, with revenue projected to be $9 billion less than expected through 2021. “That leads us to a horrible place” where city services will be cut and workers will be laid off and furloughed unless the federal government enacts a fiscal stimulus package for state and local governments, he said.

He called on the state legislature to permit the city to cover operating expenses through borrowing if the federal legislation isn’t enacted. The revenue-loss estimate is worse than the $7.4 billion that city budget officials predicted last month, a reflection of the coronavirus’s deep economic impact upon the city, he said. State law requires that the $89.3 billion budget be balanced and approved by June 30.

The District of Columbia will lift its stay-at-home order Friday, making the nation’s capital one of the last areas in the U.S. to start reopening. Prohibitions on groups of 10 or more and other restrictions will remain in place, said Mayor Muriel Bowser, who urged city residents to remain cautious. “This virus is still in our city, still in our region and still in our country,” Bowser said at a news briefing Wednesday.

“I still think that we have a good chance, if all of the things fall into the right place, that we might have a vaccine that will be deployable by the end of the year, by December or November,” Fauci told CNN. He also said that recent instances of social crowding — such as a pool party in Missouri — are “very troubling,” and that a second wave of Covid-19 isn’t “inevitable” if people are prudent.

U.S. testing capability is getting “better and better,” Fauci said.