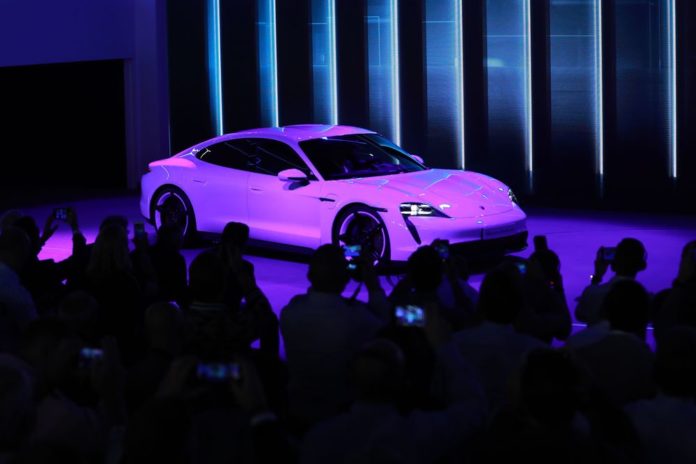 (Bloomberg) — After four years of hype, Porsche has debuted the Taycan electric car. The four-door sedan is the first all-electric vehicle from the Stuttgart, Germany-based automaker. (Although its founder, Ferdinand Porsche, built hybrid-electric “electromobile” cars under his own name as early as 1900.) The first models in the new series are the $185,000, 750-horsepower Taycan Turbo S and the $150,900, 670-horsepower Taycan Turbo.

Range was announced as 450 kilometers, or 279 miles, which is less than that of the latest Tesla Model S. Less powerful—and likely less expensive—variants of the all-wheel-drive cars will follow later this year: The first big derivative, called the Taycan Cross Turismo, will arrive at the end of next year.

“We know we need to continue evolving, because the world around us is evolving,” said Klaus Zellmer, head of Porsche North America, at the debut on Sept. 4 in Niagara Falls, Ontario. “In the automotive industry we will see more change in the next five years than we have seen in the past 50.”

Roughly 200 journalists and invited guests gathered at the site—known for hydroelectric power—for the unveiling on Wednesday morning, which occurred simultaneously with mirror events at a solar farm near Berlin and a wind farm near Shanghai. “The future is electric, whether you want it or not,” Zellmer said.

The 2020 Porsche Taycan represents the biggest investment Porsche has ever made in a new model, Zellmer said, incorporating funds from $6.6 billion the company has devoted to making electric vehicles at a new factory in Stuttgart.

It benefits from the additional $2 billion that parent group Volkswagen AG spent to build the Electrify American program, a VW subsidiary that owns and maintains a national network to charge electric vehicles. Roughly $800 million of that sum will be used to build an electric network in California alone.

It also spells the birth of an entire third appendage to the Porsche portfolio, adding battery-electric vehicles (BEVs) to the existing roster of combustion engine and hybrid-motored vehicles, such as the Cayman, Macan, Panamera, and 911. After the Taycan Cross Turismo electric car, there will be a fully electric Macan, Zellmer said: “By 2025, more than 50% of all Porsche vehicles sold worldwide will have a plug.”

The 2020 Porsche Taycan looks much like the Mission E Concept that debuted at the Frankfurt Motor Show in 2015, with some notable changes. It has lost the suicide doors, futuristic disc wheels, and rear definition that the concept had, mainly due to safety regulations and concerns, said Chad Bass, Porsche’s manager of E Performance. With seating for four and a trunk big enough to hold two large golf bags, the current iteration looks most similar to the $86,300 Panamera sedan.

Read: Have We Hit Peak Supercar?

It has two electric motors, one at the front axle and one at the rear axle, that allow the Taycan Turbo S to go from zero to 60 mph in 2.6 seconds, while the Taycan Turbo can do it in 3 seconds. Both times equal, but do not beat, times posted by Tesla’s Model S. Top speed for both is 161 mph.

But don’t let the “Turbo” name fool you. The Taycan is not turbocharged. Porsche is using the term “Turbo” for branding only, since an actual turbocharger is a device driven by an engine’s exhaust gas that forces compressed air into a combustion chamber to enhance efficiencies in internal combustion engines—not in electric motors.

“For Porsche, the Turbo name represents a brand, the top tier of our performance vehicles,” Calvin Kim, a Porsche spokesman, said in an email. “As the new Taycan Turbo and Turbo S represent the top tier of the Taycan family celebrating its world premier today, we believe it deserves the title.”

Under the hood and chassis, Taycan packs adaptive air suspension, rear-wheel steering, and four drive modes. Those include “Normal,” “Sport,” “Sport Plus,” and “Range.” An individual system can also be configured according to preferences. Unlike other electric cars that operate in one gear, the Taycan has a two-speed transmission, allowing it a quicker acceleration rate and then, in second gear, to maintain efficiency and power while traveling at high speeds better than a typical single-gear configuration would.

The Taycan will also be the world’s first production vehicle with a system voltage that can charge with 800 volts, instead of the commonly used 400 volts for electric cars. That means that under ideal conditions (not fast driving, not running the AC), the time to get from 5% to 80% charged will be 22.5 minutes.

The 800-watt chargers are part of Porsche’s plan to afford easy charging to all Taycan owners. Each Porsche dealership and experience center will offer quick-charge stations, and each Taycan owner will receive three years of free charging on the Electrify America network.

Inside, most of the conventional buttons and knobs found in previous Porsches have disappeared in favor of an almost totally touch-controlled dashboard and center console. The main instrument cluster is a curved, 16.8-inch screen with a small touch-control field at the edges to alter light and chassis functions.

Drivers can choose among four display modes for the configurable cluster, including “Classic,” which is reminiscent of traditional Porsche gauges (minus the tachometer), and “Pure,” which simply displays such essential information as speed and route guidance.

There’s also a 10.9-inch infotainment system with customizable home screen and an angled 8.4-inch touch panel with handwriting recognition to control things such as the climate inside the cabin. The Porsche Taycan will be the first car ever to come with Apple Music built directly into the car’s entertainment system.

In the rear of the cabin, a 5.9-inch touch control panel directs climate and audio zones. Interior trimming materials made sustainably from recycled polyester fibers and floor coverings and from old fishing nets are available.

The First of Many Electrics

At a private event on Tuesday evening, before the debut in Canada, Zellmer showed a film comparing the the Porsche line’s introduction of electric technology to when the company first introduced turbocharging to such endurance racing cars as the 917 and later, the 930 production car. Electrification of the Porsche line is a calculated risk, an announcer said, but the company thrives on the challenge.

“Taycan is a turning point for Porsche and the entire automotive industry as it raises the technical bar for EVs beyond Tesla,” said Michael Dean, a senior automotive analyst for Bloomberg Intelligence, in his latest report on the company.

Porsche is using the Taycan to break into the all-electric segment slightly differently than did such competitors as Audi and Jaguar, which chose to attack Tesla’s dominance with their own all-electric SUVs, the e-Tron and i-Pace, respectively. Porsche, on the other hand, opted to jump into the all-electric market in the form of a four-door sedan. (It debuted the 918 hybrid supercar in 2013 and Cayenne hybrid SUV in 2014, but Taycan is the first modern Porsche vehicle that is all-electric.)

“The Taycan should achieve a rare feat for a first-generation BEV and be profitable from launch, given Porsche’s proven pricing power, albeit at vastly reduced margins as compared with gas-powered models, in our view,” Dean said.

Reportedly all 10,000 of the Taycan units allocated to North America have already sold, with an additional 10,000 to 20,000 slated for the rest of the world. None have been allotted to the Porsche car-sharing program, Porsche Password.

Perhaps the biggest question regarding the triumph of the new vehicle is how it compares to its closest competitor, the Tesla Model S. The pre-eminent electric sedan—with a price range from $79,990 to well over $100,000—Model S has set the bar as the first and best option for a luxury-level electric sedan. It has a total equivalent of from 417 horsepower up to 762hp and an all-electric range of up to 370 miles. The Taycan’s pricing, however, will start in a higher category than that of the Teslas: $185,000 for the Taycan Turbo S and $150,900 for the Taycan Turbo.

Zellmer said that 50% of the people who have reserved a Taycan are new to the brand, with the most conquests coming via Tesla owners. The biggest switch from the other half of the Taycan reservers are those who own the 911.

Porsche brass have downplayed the likelihood that Taycan would cannibalize sales of the Panamera sedan, which accounted for less than 10% of all the brand’s sales globally last year. (By contrast, the Cayenne and Macan SUVs comprise more than 60% of all Porsche sales.) Since the Taycan offers blinding speed and the aura of the new fancy thing, consumers may wonder why they should buy the more ubiquitous Panamera at all, especially in the hybrid versions.

“People will want combustion engine cars for a long time,” Bass said, adding that he did not foresee the Taycan taking a big chunk of Panamera sales.

The debut came a week after Porsche announced it had set a record-breaking lap of 7 minutes, 42 seconds for a four-door electric vehicle at the Nuerburgring race track in Germany. The Tesla Model S has not publicly attempted that record.

Deliveries to the United States will begin in early 2020. 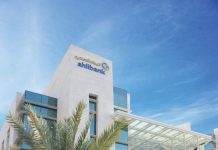