(Bloomberg Opinion) — A few short years ago, law schools were falling out of favor with young Americans looking for a route to affluence, influence, or both. Business schools, on the other hand, were attracting more students than ever.

This year, the number of applicants to U.S. law schools is up an estimated 3.2%, after rising 8.1% last year. Graduate business schools in the U.S. saw a 6.6% decline in applications last year, and indications are that applications are down again this year as well.

OK, there are some other factors at work, especially at business schools, where the traditional MBA (master’s in business administration) is falling out of favor even as other programs gain. But President Trump’s policies and utterances really do seem to be driving more young Americans to go to law school while at the same driving foreign students away from U.S. business schools. Right now this shift matters mainly to people who work at law schools and business schools, but it will affect certain high-end parts of the U.S. labor market for decades to come.

Here are the statistics, starting with law schools, where enrollment began plummeting in 2011 and hit bottom in 2015 and 2016. 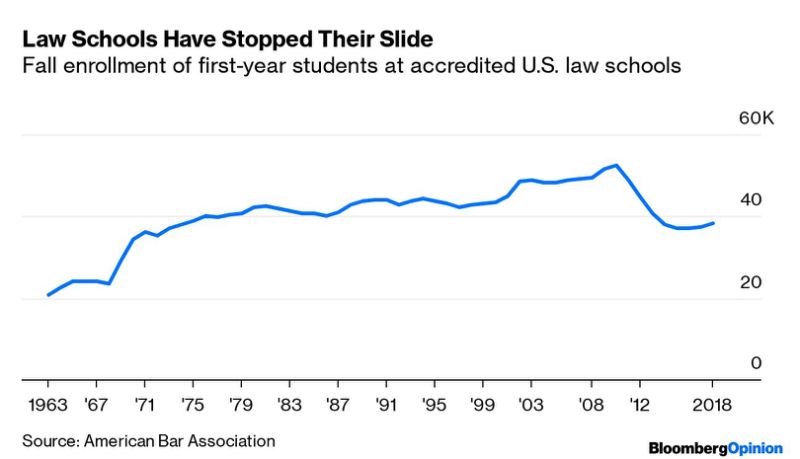 There was also a decline in the quality of law school applicants, at least as measured by scores on the Law School Admission Test, and that has turned around too. The percentage of applicants getting scores of less than 150 (out of 180) rose from 33.6% in 2012 to 38% in 2015; this year it’s back down to 33%.

The fact that the number of new law students stopped falling in 2016, before Trump was elected, is an indication that this can’t be all about him. The decline in first-year law students from 2011 to 2015 was so sharp that it brought enrollment back to early 1970s levels, which may have been overkill given that there are a lot more legal jobs now than there were in the 1970s, and the Bureau of Labor Statistics projects an 8% increase in the number of jobs for lawyers from 2016 through 2026.

Still, a law degree is rightly no longer seen as quite the path to a secure and remunerative career that it used to be, and a lot of today’s law school applicants seem less interested in their future earnings profiles than in using their legal skills to fight the power, or something like that. In one survey conducted by test-prep provider Kaplan, 87% of law-school admissions officers said “the current domestic political climate” was a significant factor in 2018’s applications increase. In another, 45% of students taking Kaplan LSAT prep courses this February said the political climate affected their decision to apply for law school, up from 32% a year earlier.

In legal circles this phenomenon has come to be called the “Trump bump,” which sounds about right. More precisely, with young people and college graduates both tending to give the president low approval ratings, it seems likely that most of these political-climate-inspired applicants are inspired by opposition to Trump and his policies. Also, all of this year’s and most of last year’s applicant gains were driven by women, who as a rule like the current president a lot less than men do. As recently as 2013, women were still a minority among applicants to U.S. law schools. This year they accounted for 55%. So U.S. law schools will for at least the next few years be churning out more smart, politically engaged, probably left-leaning lawyers, most of them women.

Meanwhile, GMAC reports that graduate business schools in Asia, Europe, and Canada all experienced application gains in 2018. In another survey by Kaplan, 31% of business school admissions officers said international students concerned about the U.S. political climate were the number one cause of the 2018 application decline, and 74% said they expect these concerns to weigh on applications in the years to come.

Trump administration policies have also made student visas harder and more expensive to get, which is surely also depressing applications from overseas. (Because legal systems vary from country to country, U.S. law schools haven’t been nearly as big a magnet for foreign students as business schools are, and thus haven’t been affected as much by these changes.)

Still, Trump can’t be the only reason MBA applications are down, given that master’s programs in business had stopped growing well before his presidency seemed even conceivable. 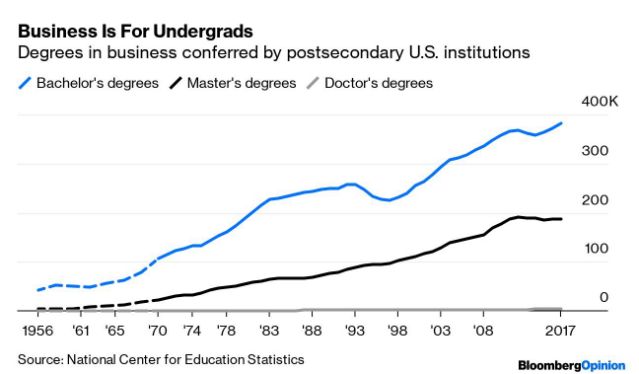 The number of people getting undergraduate business degrees has risen this decade even as master’s programs have flat-lined. Within master’s programs there’s also been a significant shift, according to the Association to Advance Collegiate Schools of Business, with the MBA and other generalist degrees (such as “master of management” degrees) losing ground to specialized degrees in accounting, finance, data analytics, and the like. 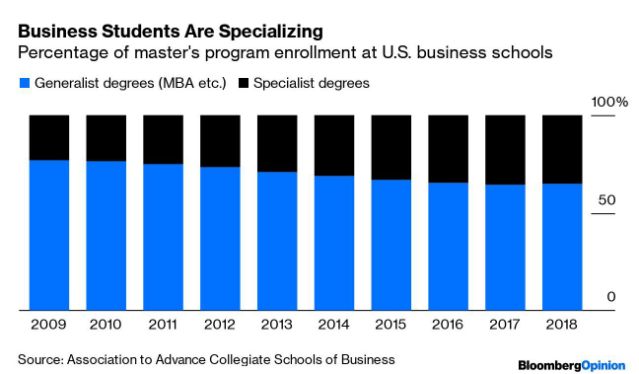 What’s driving these changes? Worries about debt loads and employability seem to be pushing more students into undergraduate business majors (versus, say, the liberal arts), which may reduce subsequent demand for MBAs.

Increasing job-market demand for specific skills, enhanced by automated applicant-screening methods that sift for those skills on resumes and LinkedIn profiles, has shifted demand away from generalist programs.

The strong job market of the past few years may be reducing the willingness of would-be MBA students to take two years out of their careers. Then there’s the increasing availability of alternatives that don’t require a career break: Virginia Tech, Wake Forest University, the University of Iowa and the University of Illinois, among others, have ditched their full-time MBA programs, with the latter two opting to focus instead on online MBAs.

None of that can be blamed on Trump, and none of it is necessarily a bad thing. But at least part of the decline in foreign applications can be and might be. What long-run effect could this have?

Well, the chief executive officer of the most valuable publicly traded corporation in the U.S. (and the world), Microsoft Corp.’s Satya Nadella, is a foreign-born recipient of a U.S. MBA, as is Sundar Pichai, the CEO of Google, which makes all the money for fourth-most-valuable Alphabet Inc. And while Nadella and Pichai originally came to the U.S. to study engineering and got their MBAs later, Ajit Jain, head of the all-important insurance arm of Berkshire Hathaway Inc., came to the U.S. for the MBA.

These are just a few examples culled from the top of the market-cap rankings, but they indicate that reducing the number of foreign students coming to the U.S. for MBAs and other graduate degrees might noticeably cut into the future talent pool of U.S.-based business.