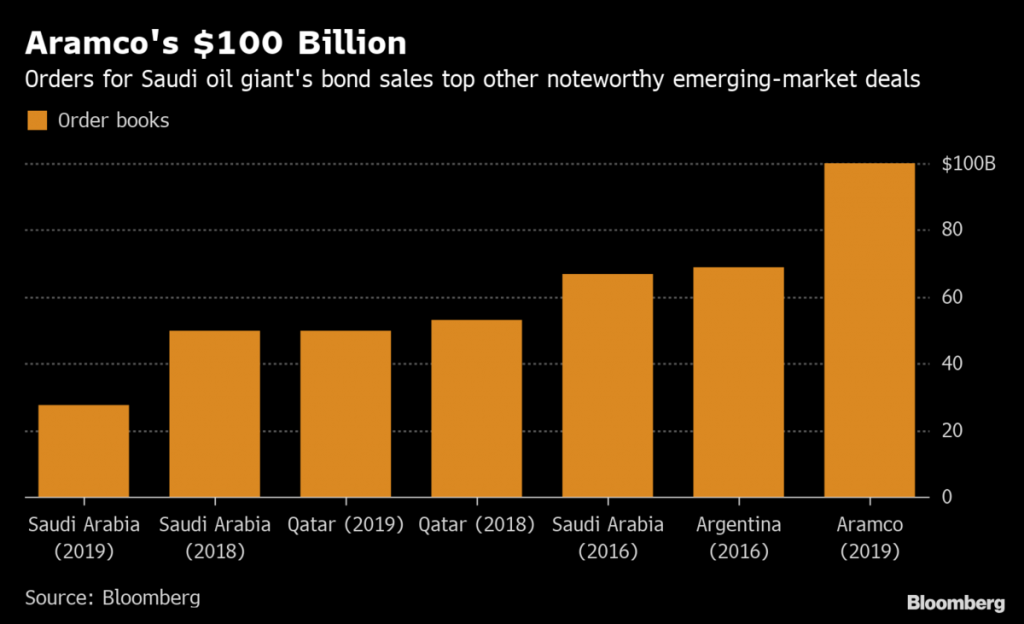 Saudi Arabia took its first major step onto the global financial stage to fund the heady ambitions of its crown prince, issuing $12 billion of bonds for its state-run oil company in one of the most oversubscribed debt offerings in history.

The demand for Saudi Aramco’s debut offering was so robust it allowed the energy giant to borrow at a lower yield than its sovereign parent. That’s a rarity in the debt world and underscores the global chase for yield that has investors brushing off long-held conventions. The rush to buy Aramco’s debt even helped to lower the borrowing costs for the kingdom.

The bond sale raises money to finance Saudi Arabia’s economic agenda after an initial public offering of Aramco was postponed last year until at least 2021. Saudi Crown Prince Mohammed bin Salman, who runs the country day-to-day, is using the state oil producer’s pristine balance sheet to finance his ambitions for the economy.

The success of the deal has also been seen as essential for some of the world’s biggest banks, who took Aramco and officials from the Saudi government — a wildly lucrative client — on a worldwide roadshow last week pitching the bonds from Boston to Singapore. Jamie Dimon, chief executive officer of JPMorgan Chase & Co., touted the deal at a lunch in New York.

The red-carpet treatment stood in sharp contrast to the reception many financial leaders gave the kingdom a year ago, when banking executives including Dimon skipped a high-profile summit in Riyadh.

During its worldwide roadshows, investors were showered with financial data and operational secrets of the kingdom’s most important asset, information that had been held closely since the company’s nationalization in the late 1970s.

The disclosures gave investors plenty of reasons to jump on the deal. With $111.1 billion of profit in 2018, Aramco ranks as the most profitable company in the world. Moody’s Investors Service likened it to a AAA rated corporation, with low debt relative to its cash flow and access to one of the world’s largest hydrocarbon reserves.

“There’s no debating how strong of an entity this is when looking at its assets and cash flow generation,” said Bob Summers, an investment-grade portfolio manager at Neuberger Berman in Chicago.

Investor orders for the five-part deal exceeded $100 billion at the peak on Tuesday, according to people with knowledge of the matter. A $3 billion, 10-year bond, for example, priced to yield 105 basis points more than U.S. Treasuries, 12.5 basis points less than what investors demand to own similar-maturity debt of the Saudi government, said the people, who asked not to be named discussing the private deal. 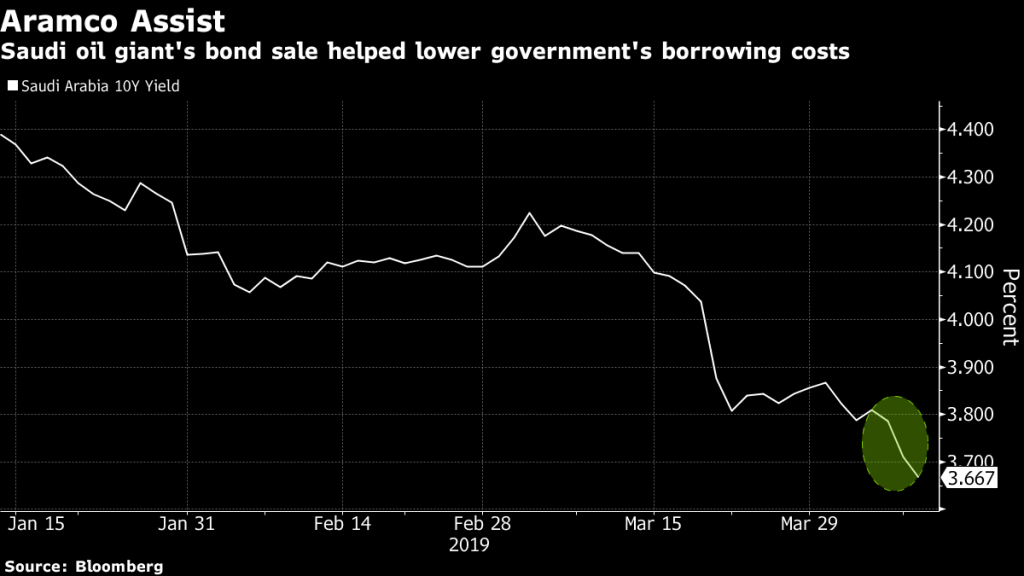 “Saudi Arabia’s fiscal reliance on Aramco may eventually drive spreads on the oil company’s proposed bonds significantly wider than those of similar maturity sovereigns. Longer-maturity issues will be more susceptible to this trend, in our view, despite a solid cash balance that offsets any near-term increase in corporate debt.”– Jaimin Patel, energy credit analyst.

Aramco received the strongest demand for longer-dated, highest-yielding bonds, which are effectively a bet on Saudi Arabia and oil around the year 2050. Longer-dated bonds are usually popular with pension funds and insurance companies seeking to match the duration of their assets and liabilities.

While other corporate-bond sales have generated $100 billion-plus of orders — including CVS Health Corp., Anheuser-Busch InBev NV and Verizon Communications Inc. — those companies targeted a substantially larger amount of debt. The final order book came in at $92 billion as Aramco dropped a planned floating-rate note and some requests were pared back.

It wasn’t the first time Saudi Arabia turned to debt markets. In January, the nation sold $7.5 billion in international bonds, showing that the outcry hasn’t stifled foreign investment in the country.

The deal had plenty of other things going for it. Investors love to get access to marquee first-time issuers, particularly those with such closely guarded secrets. That also allows fund managers to diversify their investment base. Managers that tie their performance to indexes also would need to get a piece.

“It’s going to be an important component of a lot of the different indices. So if you’re index sensitive, you can’t avoid it,” Dan Fuss, vice chairman of Boston-based fund manager Loomis Sayles & Co., said in a Bloomberg Television interview.

Moody’s and other credit raters tempered their enthusiasm, though, rating it in line with the Saudi government with the fifth-highest investment-grade ranking.

“That offering is as pricey as I’ve seen in quite a while,” said Loomis’s Fuss. “When bonds are oversubscribed, it’s really a good idea not to be one of the subscribers.”