The Sultanate is currently implementing strategic projects worth more than $25 billion in the oil and gas sector to sustain economic diversification, according to HE Salim bin Nasser Al Aufi, Undersecretary at the Ministry of Oil and Gas.

“Strategic projects and economic diversification plans in Oman are key,” he said while addressing the 2019 annual media briefing hosted by the Ministry of Oil and Gas recently. “The aim of the strategic projects is to make a significant contribution to sustainable development through which the Ministry of Oil and Gas (MOG) seeks to attract promising investment opportunities, expand investments and work with partners to capitalise on technical expertise to help boost local production and create jobs, which have so far reached some 6,000 positions,” he said.

Among the key strategic projects are Rabab Harweel Integrated Project (RHIP), one of the largest oil and gas investment projects in terms of capital costs being implemented by Petroleum Development Oman (PDO) with an investment of $4.7 bn. The integrated project will produce gas and condensates from the Rabab field and oil from the Harweel field using miscible gas injection. Production is expected to start in June this year, he added. PDO is also implementing Yibal Khuff project at a cost of approximately $2.9 bn.

The project, which consists of the integral development of the Khuff and Sudair reservoirs for the production of acid oil and gas, is the second largest project in terms of surface area and the most technically complicated project in the Sultanate. The project is expected to start production in early 2021. The Tayseer acid gas field, which was discovered in late 2014 was developed with a preliminary production processing plant to process gas and condensates, which contain 4 per cent hydrogen sulphate gas to produce 35 million cubic feet of gas and 4,400 barrels of condensate per day. Operation and production of gas and condensates started in early 2019 with an overall cost of about $350 mn.

Other projects include BP’s Ghazeer Gas field, which represents Phase 2 development of Block 61 area development plan. Implementation began in early 2018. Sixteen wells have been completed so far. The project will contribute half a billion cubic feet daily by the start of 2021.

The Oman Oil and Orpic Group is executing the Salalah Liquefied Petroleum Gas Project at a cost of $826 mn. Estimates indicate that revenues will reach around $200 mn annually through the sale of 300,000 tons of LPG and condensates. The project is expected to be completed in the third quarter of 2020.

Liwa Plastic Industries Complex (LPIC), is yet another project, which is under construction at a cost of $6.7 bn.  For the first time, the Sultanate will be able to produce polyethylene, a class of plastics with growing global demand. The project is scheduled to be ready in Q2 2020. The Duqm Refinery project is one of the major projects that will benefit the Duqm economic zone. The project’s refining capacity will reach 230,000 barrels per day at the start of operations and will produce diesel and jet fuel as well as naphtha and LPG.

Al Aufi said the Sultanate will see huge investments in other projects such as a liquefied natural gas (LNG) hub for shipping, gas-to-liquid project and de-bottlenecking of capacity at Qahlat LNG project. Nineteen local and international companies are currently engaged in oil and gas exploration and production in Oman, he informed.

The government, he said continues to deploy efforts to encourage the local and international private sector toward joint investment in the oil and gas sectors in all petroleum projects across their different iterations, ranging from exploration through production and development, on to the creation of gas-dependent projects and auxiliary services projects for the petroleum industry.

PDO to ramp up oil production

Meanwhile, Petroleum Development Oman (PDO) has announced plans to ramp up oil production to a new level of 670,000 barrels per day (bpd) in the next five years. After setting a 550,000 bpd 10-year plateau commitment over the last decade, the company has consistently grown production and is confident of delivery of further production growth. This comes after it confirmed that 2018 yielded its highest oil output since 2005 of 610,170 bpd, despite the impact of Cyclone Mekunu last May, which disrupted production in the south of its concession area. 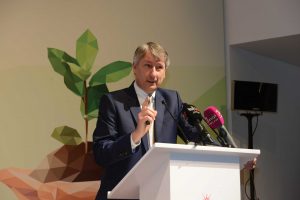 PDO managing director Raoul Restucci said, “Our approach has been simple: to stay the course in the face of oil price uncertainty and increasing technical and operational scale challenges. Increasing value delivery for the nation’s development and preparing the business to face changing energy expectations. This means more sustainable oil and gas, driving energy efficiency in all aspects of our operations, and broadening our business model to add value to Oman beyond operations in our concession.”

“As we head into the next decade, we are stepping up the deployment of new technology and pursuing ever more efficient ways of working to achieve enhanced productivity in our exploration and production business. During 2018, we successfully delivered a combined daily oil, gas and condensate output of 1.205 million bpd.”

PDO set new milestones on the safety front, achieving a record 0.15 Lost Time Injury Frequency – a 25% fall on 2017. Total Recordable Case Frequency was also down at 0.71 with more than 214 million man-hours of activity. On the road safety front, staff and contractors drove more than 750 million kilometres without a work-related motor vehicle fatal incident, and on asset integrity, there was a 77% fall in the number of Tier 1 process safety incidents and a 50% drop in Tier 2 incidents – both the lowest since 2010.

Restucci said, “These improvements highlight the ongoing concerted effort across the Company to enhance safety and operational excellence at the frontline. This is achieved through better supervision, awareness, training, and the continuous implementation of new technologies and programmes, such as our game-changing new Ihtimam behaviour-based system.”

“Regrettably, the impressive results were overshadowed by the deaths of two contractor employees at Nimr in April and Yibal in July, tragic reminders of the constant need for improved vigilance and greater rule compliance at all levels.

“In a year in which we celebrated four decades of uninterrupted gas supply, I’m pleased to report that we also successfully migrated to becoming the country’s swing producer, requiring us to operate in a highly dynamic mode, frequently compensating for third party production variations.

“However, it’s important to stress that while oil and gas will continue to be fundamental to our energy mix, we are developing innovative renewable solutions to create new growth opportunities for the Company as well as for the nation. This has us increasing emphasis on renewables, such as solar, whilst leveraging new technology and improving our overall energy efficiency.”

Restucci said “good progress” was being made on both PDO’s “mega” projects at Rabab Harweel and Yibal Khuff with the former, the largest capital project in PDO history, expected to come on stream in mid-2019, representing a reserve add of more than 500 million barrels of oil equivalent. The latter, an integrated sour oil and gas development, is scheduled for start-up in 2021, developing in excess of 327 million barrels of oil equivalent.

“Both of these departments rely heavily on Omani talent and are playing a critical role in ensuring we remain competitive and fit for the future. We are also looking at how we can commercialise their expertise beyond our boundaries in areas such as enhanced oil recovery, project management and training.”

PDO continued to drive a rigorous cost control and Lean business efficiency programme across the full spectrum of its business, completing a total of 142 efficiency improvement projects which secured $152 million in cost savings. A further $300 million of projected savings were identified through cost improvement reviews with our contractors and other value optimisation initiatives in response to the lower oil price environment.

Despite the increased complexity in the 2018 drilling scope, the company’s Well Engineering Directorate delivered 600 new wells and achieved the best ever recorded cost per metre drilled in PDO’s history (4% lower than 2017). At the same time, it also managed to be more efficient in terms of drilling time per metre with a 5% improvement compared to the previous year.

By the end of 2018, the directorate had carried out 22,400 completion and well intervention activities – the highest number ever recorded with the same number of resources as previous years.

PDO ramped up its In-Country Value programme, awarding contracts worth $3.7 billion to nationally registered firms, retaining a value in country of 44%, and supporting the opening of new Oman-based workshops and factories to service the domestic oil and gas sector.

Its National Objectives team generated 17,027 employment opportunities for Omani jobseekers, consistent with the target for the year, in both the oil and non-oil sectors. For 2019, the company is targeting the creation of 21,000 job opportunities.

Restucci said, “Against a backdrop of fluctuating trends in the global market and increasing technical, operational and financial challenges, I am pleased to announce that, in 2018, PDO exceeded performance expectations across a wide range of asset and functional targets and is well positioned to continue to play our part in support of value creation for all our stakeholders.”

The newly integrated Oman Oil and Orpic Group, has planned to increase the market capitalisation of its combined assets to $30 billion by the year 2030.

Ahmed al Jahdhamy, CEO, Downstream, said the newly integrated entity, also envisions doubling of its contribution to the Sultanate’s Gross Domestic Product (GDP) to $20 bn. The Group also plans to start paying dividends of a minimum of $1 billion per year from 2029 onwards. 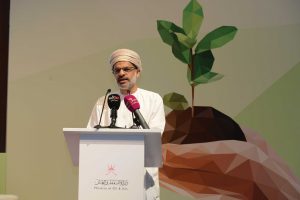 “We want to facilitate international and local, private participation in the energy sector,” Al Jahdhamy said and added that it intends to add at least $25 of value per barrel in its downstream businesses.

The Group, he said had concluded a 100-day programme under the name of ‘Nakhla’ to evaluate the scope for sustainable growth in multiple growth markets, declaring a new vision and organisational structure that will deliver profound benefits for the national economy. Together with its local and international partners, the Group will invest in excess of $28 billion in the next 10 years, he said.

Musab al Mahrouqi, Group CEO, said the integrated Oman Oil and Orpic Group intends to generate $250 million worth of additional value to the Group through the implementation of ‘quick-win’ initiatives in 2019. 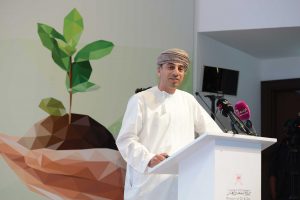 Lauding the staff of the integrated group for the success of the quick-wins programme, Al Mahruqi informed that the integration process is expected to take about 18 to 24 months during which we will restructure, integrate and draw up a new organisational structure for all our core functions. 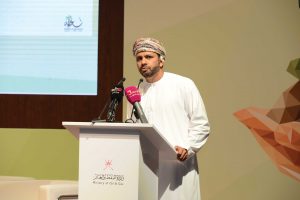 The 230,000 barrels per day capacity Duqm Refinery is slated to produce a vast array of clean products that comply with global standards for quality and safety. 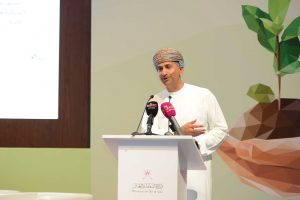 “2018 represented the first full year of production from Khazzan field and we are proud to report that we met our targets during that period,” BP Oman President Yusuf al Ojaili said. 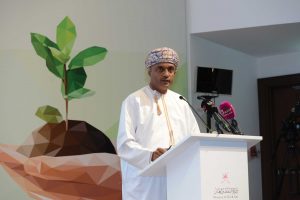 BP has been responsible for delivering gas from the Khazzan field in Block-61, he said adding that BP and Eni recently signed a heads of agreement with the Ministry of Oil and Gas to work jointly towards the award of a new exploration and production sharing agreement for Block 77 in central Oman.

Occidental Oman, which is the second largest oil producer in the Sultanate expanded its concessions in 2018 by signing two EPSAs for Block 65 and 51. 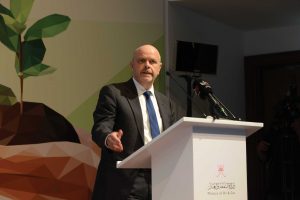 The 2018 exploration programme resulted in nine discoveries with 60 per cent success rate for the year. The company added 120,000 barrels per day (bpd) of liquid handling capacity, 40,000 bpd of water injection capacity and 30 million standard cubic feet per day (MMSCFD) of gas compression capacity in 2018 in Block 9 and 27.  Kelly also spoke about Oxy Oman’s dramatic growth over the past 18 months, during which it added four blocks-30, 51, 65 and 72 to its growing portfolio, taking the number of its assets to eight in the Sultanate. 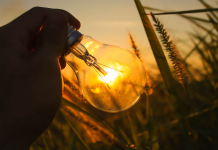 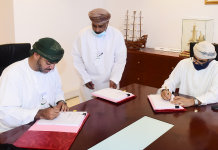