(Bloomberg) — Stocks across the Middle East’s most liquid markets declined in a sign that the latest escalation in the US-China trade war is deepening concern about a global recession.

Gauges in Saudi Arabia, Kuwait and Dubai lost at least 1.7% on speculation slowing growth will sap demand for oil.

“If there is regional tension or if oil faces pressure, Saudi markets tend to be the most impacted in the GCC,” said Aarthi Chandrasekaran, a money manager at investment bank Shuaa Capital in Abu Dhabi. “If there is a global meltdown, Dubai and the United Arab Emirates tend to be most impacted as the role of international investors remains high inside the financial market.”

The declines may be a taste of what’s in store for the rest of the world on Monday after China threatened to impose additional tariffs on $75 billion of U.S. goods including soybeans, automobiles, and oil, in retaliation for President Donald Trump’s planned levies on Chinese imports.

China is the biggest trading partner for Saudi Arabia, the United Arab Emirates, Kuwait, and Oman, all of which rely on income from oil exports to fund government spending. Brent crude declined 1% to $59.34 per barrel Friday, below the breakeven prices for most budgets in the Gulf Cooperation Council nations. 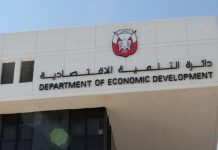