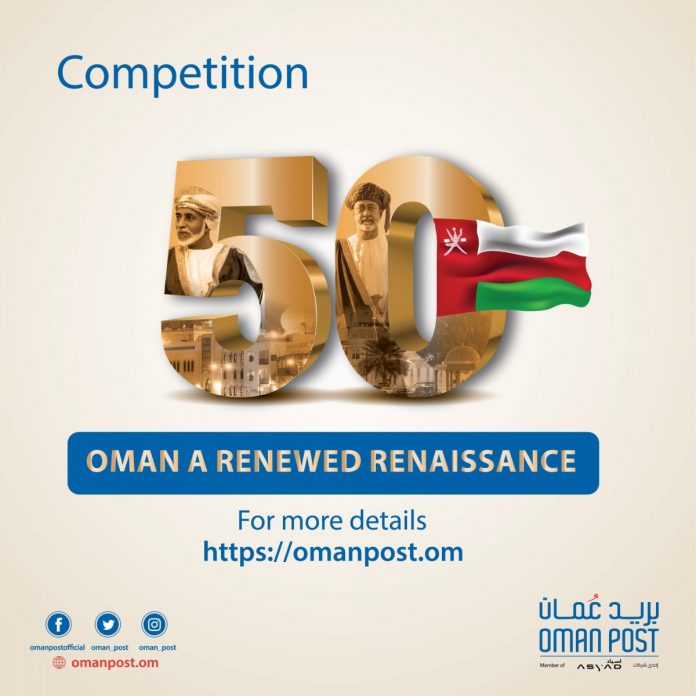 In recognition and celebration of the legacy of the late His Majesty Sultan Qaboos bin Said, Oman Post has announced a competition to design a collection of commemorative stamps for the 50th National Day.

Participants have until July 24 to submit their artworks, representing any of eight themes covering the development of the Sultanate in the last half a century. The chosen artworks will then feature on the unique issue, to be launched on November 18, 2020.

Over the past 50 years, the benevolent rule of the late His Majesty Sultan Qaboos bin Said has paved the way for the prosperity of the Sultanate and its people. Oman Post is celebrating the legacy of this visionary leader who paved the way for the development and progression of the nation, working tirelessly to build a proud country for future generations; one that enjoys a thriving business environment, robust policies and incentives all supported by a solid and sustainable infrastructure.

Abdulmalik Al Balushi, CEO of Oman Post, said, “Guided by the late His Majesty Sultan Qaboos bin Said, Oman planted the seeds of growth 50 years ago with a dream to create a sophisticated globalized economy and today, it is harvesting a healthy crop that promises continued progress led by His Majesty Sultan Haitham bin Tariq.”

He added, “The 50th National Day marks a very special anniversary in as we celebrate the outstanding achievements of our late and beloved leader, the late His Majesty Sultan Qaboos bin Said. The competition aims to bring to the forefront a longlist of milestones throughout Oman’s renaissance by presenting them through the eyes of the people and turning them into commemorative stamps that can be enjoyed by all. We have chosen a set of themes that reflect various aspects of the Sultanate’s development, including life, society and the economy, and they will serve to remind us of our remarkable progress and of our prosperous future.”

With a prize of RO300 per selected artwork, artists can submit up to 10 works, using any technique including hand drawing, digital, photo, or mixed media. The art should be an original idea and composition, based on eight themes, namely; sustainable development in Oman; solidarity, tolerance and togetherness in Oman; health sector development; women and development in Oman; education development; security and safety; Oman: the oasis of peace; and youth in Oman. For more details, visit www.omanpost.om.