(Bloomberg) — Qatar is experiencing economic whiplash as it winds down $200 billion of infrastructure works to prepare for the 2022 soccer World Cup.

Construction shrank 1.2% from a year earlier in the first three months of 2019, contracting for the first time since the data series began, according to Qatar’s Planning and Statistics Authority. Before the decline, it grew at an annual average of 18% a quarter since the end of 2012.

The downturn is increasingly putting the brakes on the broader economy, with output excluding oil and gas extraction rising less than 2% in the last six months, figures released on Thursday showed. Qatar’s gross domestic product has jumped 10-fold since 2000 to $192 billion last year, according to the World Bank. 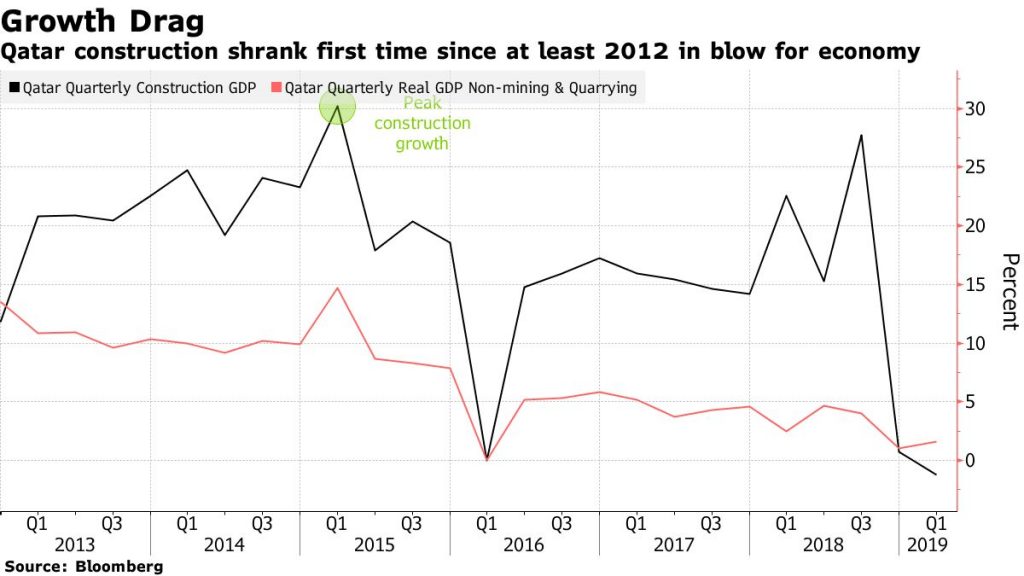 Builders have raced ahead at a breakneck pace since 2010, when the small peninsular nation unexpectedly won the rights to host the world’s most watched sporting event. The Gulf state seized the chance to upgrade its infrastructure, building roads, metro lines and thousands of hotel rooms. Construction surged over 30% at the start of 2015.

The effort helped the world’s largest exporter of liquefied-natural gas weather a punishing regional boycott led by Saudi Arabia, with which it has its only land link. Qatar dipped into its deep coffers to keep construction work on track.

But the building boom that carried Qatar for almost a decade began to show signs of fizzling out late last year, ending it with a sharp slowdown as the country enters the final stretch toward the tournament. Meanwhile, the rest of its economy is near a standstill, with mining and quarrying contracting most quarters in recent years.

As large projects such as the metro and stadiums are largely completed, “you’re going to have a couple years of lower growth,’’ said Rory Fyfe, managing director at MENA Advisors, a regional economic consultancy.

But a turnaround may be just around the corner as Qatar expands its LNG capacity in the next several years.