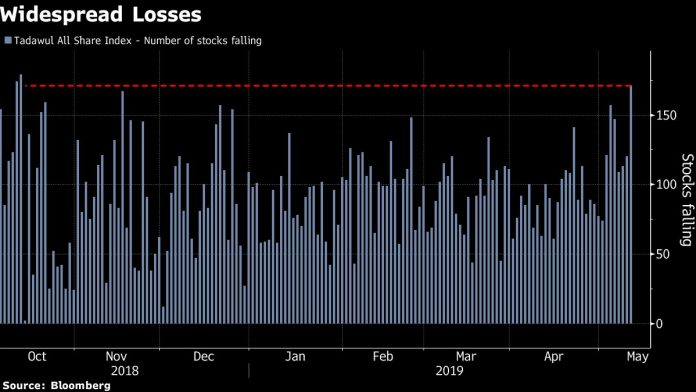 (Bloomberg) — Stocks slumped across the Gulf, with Saudi Arabia’s benchmark index dropping the most since the Khashoggi crisis, after the kingdom said two oil tankers were damaged in a “sabotage attack” on Sunday. The heightened geopolitical tension added to an already bad day across global markets.

Gauges in Riyadh, Dubai, Abu Dhabi, and Doha were among Monday’s biggest losers globally. News of the incident led to increased trading volatility as the U.S. ratcheted up pressure on Iran, with investors also trying to price in a potential full-blown trade war between the U.S. and China. Turkey’s benchmark index also lost about 3%.

Saudi Arabia’s Tadawul All Share Index closed 3.6 percent lower, the steepest drop since the crisis triggered by the killing of journalist Jamal Khashoggi in October. Not even a pending announcement by index compiler MSCI Inc., which will say which stocks it will upgrade to its main emerging-market index after U.S. markets close, was enough to pump trading and help the index recover.

Of the 191 members of the Saudi gauge, 173 fell while 10 were unchanged and eight advanced. That’s the highest number of losers for a session in almost seven months.

The indexes in Dubai and Abu Dhabi fell 4% and 3.3%, respectively on Monday, posting their steepest drops since January 2016, when Brent crude plunged below $30 a barrel. The main reference in Qatar, which shares a giant offshore gas field with Iran and has been under a Saudi-led embargo since 2017, fell for a seventh straight session to the lowest since September.

“The timing of the recent events in the region is not ideal when you consider the investor anxiety in global markets,” said Jameel Ahmad, global head of currency strategy and market research at FXTM in Limassol, Cyprus.