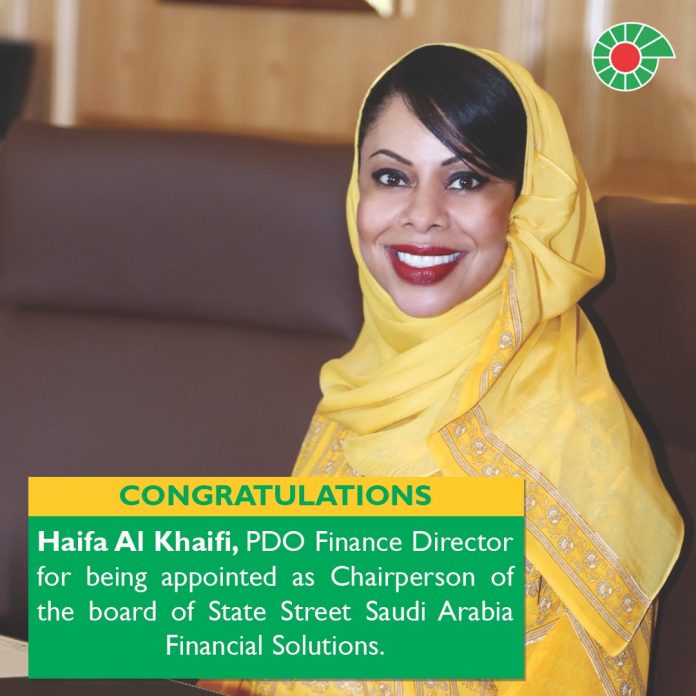 State Street Saudi Arabia Financial Solutions, an underlying subsidiary of State Street Corporation (NYSE:STT), has announced the appointment of Haifa Al Khaifi as Chairperson of the Board, and Rasha Saleh to the Board of Directors.

Al Khaifi serves as the Chief Financial Officer of Oman’s leading oil and gas exploration and production company, Petroleum Development Oman (PDO), and has a proven track record of international strategic leadership in both corporates and on boards. Al Khaifi is recognized as one of the region’s most prominent business leaders for her extensive leadership, executive management and operational excellence over the past 25 years, and she is regularly named as one of the most influential women in the Middle East by Forbes. Her experience also includes funding strategies through alternative fiscal models and monetisation projects. Al Khaifi chairs multiple boards and committees such as the Tender Board and the Pension Fund in PDO, the contributor of 75% to Oman’s economy. Al Khaifi has represented the country in discussions with the IMF, credit rating agencies and other government bodies.

Saleh was most recently Chief Compliance and Money Laundering Reporting Officer at Northern Trust Co. of Saudi Arabia Riyadh, and has more than 24 years of experience in the banking and investment sector. At Northern Trust, she led the authorization process in building the company’s regulatory framework in Saudi Arabia.

“We are delighted and honoured that Haifa and Rasha will be joining our Board to help oversee our exciting new expansion plans in the Middle East,” said Jörg Ambrosius, head of Europe, Middle East and Africa. “Bringing onboard someone of Haifa’s highly respected calibre and prominence, alongside Rasha’s rich experience of the regulatory environment, underpins our commitment to this venture. I know State Street will benefit from the valuable insight and counsel that they will bring to our Board in Saudi Arabia.”

“I am honoured to be appointed as Chairperson of the Board, an important role in State Street’s governance”, said Al Khaifi. “State Street has a strong heritage in the Middle East, and is committed to growing in our region. I look forward to working with the Board and management in delivering this exciting strategy.”