Under the patronage of HH Asa’ad bin Tariq bin Taimur al Said, the winners of the 26th World Travel Awards were announced on Thursday, 28th November. The ceremony was hosted by the Sultanate under the exclusive sponsorship of Oman Airports.

The largest event in the world of travel and tourism was attended by HE Dr. Ahmed Mohammed Salem Al Futaisi, Minister of Transport, alongside over 600 representatives from the global airlines and hospitality sectors. The Sultanate was able to win 16 grand prizes out of 144 which were distributed to more than 180 participating countries.

Read also: Oman’s aviation sector to contribute over OMR1.4bn to GDP by 2040

Commenting on their participation, Sheikh Aimen bin Ahmed Al Hosni, Chief Executive Officer of Oman Airports said, “The travel and tourism sector is one of the most promising sectors for the future of the national economy in terms of diversifying the sources of income away from the oil and gas sector.

“With the building of a strong infrastructure at the airports and internal road network, this opportunity has become extremely favorable. As an enabling sector for the tourism industry, our initiative to host the world’s largest travel and tourism event aims to enhance the Sultanate’s presence on the map of the most prominent destinations in the region.”

“The Sultanate hosted more than 600 representatives of international travel and tourism companies who attended the ceremony, which was an incredible opportunity for their counterparts in the Sultanate and those working in this field to consolidate relations and build trade partnerships to enhance their performance and increase the number of tourists coming to Oman. The global media coverage that accompanied the event from the international media, which highlighted the promising potential of the Sultanate at the level of tourism, such as, global network TV5 that covered the ceremony directly on its channels, is a great added value to the Sultanate’s efforts in promoting tourism,” Al Hosni added.

Oman won an international award for the World’s Leading Nature Destination, which enhances its presence on the list of preferred tourist destinations for the year 2020.

Commenting on the ceremony, Graham Cooke, Founder and President of the World Travel Awards said, “We are delighted to be hosting our Grand Final Ceremony of the 2019 World Travel in a very beautiful city like Muscat. I believe that after seeing various Omani companies win so many awards, I am confident that the Sultanate of Oman is leading the way towards enhancing the performance of its travel and tourism sectors, to become one of the most important sources of its economic income.” 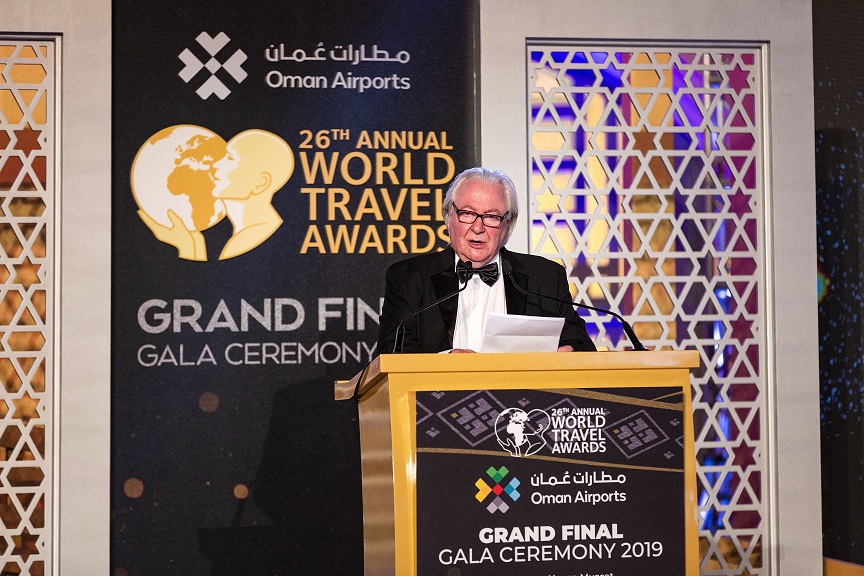 The Grand Final Gala Ceremony of the World Travel Awards, held at the Royal Opera House in Muscat, is the last and the largest award ceremony in the world, and comes after a series of regional celebrations to recognize excellence in each continent, where the celebrations this year included Montego Bay (Jamaica), Abu Dhabi (United Arab Emirates), Mauritius, Madeira (Portugal), La Paz (Bolivia), Phu Quoc (Vietnam).