(Bloomberg) –Full disclosure: 2019 was not my typical travel year. Where I traveled, how I got there, how frequently I hit the road—everything was different. In no small part, that’s because I spent the year either pregnant or caring for a newborn.

By January the globe shrunk down to places where the U.S. Centers for Disease Control and Prevention had no active Zika classification—in other words, a handful of options outside Europe. In March it shrunk further, when I was no longer allowed to fly. (How does a travel editor survive?) Finally, in the first two months of my new daughter’s life—up until her first vaccines—I practically fenced myself into the neighborhoods around my home. It was an exercise in appreciating the treasures in my own backyard rather than the far-flung spots that have typically struck my fancy.

It was surprisingly lovely, but it didn’t last. My baby had her passport—and Global Entry—before she turned 4 months old. (Yes, she had to go to JFK for an “interview” screening. It was ludicrous.) And I’ve already broadened her world across the Atlantic. Next year will be promising for both of us; so far we plan to travel together every month until at least June, mostly internationally. One day, I hope, she’ll look back on this and realize how lucky she was. (Perhaps when she loosely retraces our footsteps in her own adulthood.) But right now, here are the five places that I’m most grateful to have explored in this life-changing year.

Drop your eyebrows. People from all around the world come to see what the fuss is about my home turf, and it’s easy to take that for granted when life moves at a punishingly fast pace. But the six months I spent on maternity leave (thanks, Bloomberg!) were full of slow, leisurely days pushing a stroller up and down every block within a three-mile radius, from the old Italian neighborhood of Carroll Gardens to touristy Dumbo, from brownstone-filled Clinton Hill to the elevated waterfront promenade of Brooklyn Heights. And when I say every block, I mean it. After discovering a handful of tiny hidden streets flanked with stunning historic homes, I took to Google Maps and charted out every minuscule lane, place, or mews I could find, then beelined there while my kiddo dozed in her UppaBaby snug seat. (These adventures often included one-handed treats, like dirty chai lattes and croissants from Bien Cuit or chicken teriyaki onigiri from JuJu, a no-frills Japanese bodega in Cobble Hill.) What I found were troves of history, unique styles of architecture, and tons of secret gardens—an idyllic, picturesque, and little-known Brooklyn that’s so worth seeking out.

Read: These Are the World’s Most Liveable Cities in 2019

I’ll never forget what it felt like to sit down in the lobby of Villa Marie and look at photos of the same room in the same hotel, only months earlier, when it had no roof and wind-swept furnishings were strewn about. St. Barts is a place that I hold dear, and I’m hardly alone in the sentiment—it’s the rare island of which my sun-phobic husband approves, and its varied topographical charms give it far more dimension than your typical fly-and-flop beach retreat. This time around, my visit was equal parts sobering and inspiring. I mourned the loss of small beachside businesses that were literally blown away by Hurricane Irma and celebrated the rebirth of iconic spots like Nikki Beach and Eden Roc, which were all coming back better than ever. It was a first-hand lesson in resilience that left me feeling more optimistic and hopeful than any other trip I took all year.

It feels especially ironic now, in hindsight, to compare the Bahamas to St. Barts in 2019. While the latter’s Irma-inflicted wounds didn’t become mainstream media fodder, the Bahamas took a far harder hit from Hurricane Dorian, and the damage to its tourism economy ended up fully in the public eye. Yes, $8 billion in damages were sustained as a result of the storm, mainly in the northwestern Abaco Islands. But the vast majority of the archipelago went unharmed—a fact that most travelers have failed to understand. As a result, tourism has plummeted, right when it’s needed most.

I visited in February, five months before the 185-mile-per-hour winds swept through. My destination: Kamalame Cay, a relaxed private island resort off the coast of Andros. Getting there negates the easy-access appeal of Nassau; after landing in the capital, you have to take another short flight, get driven to a ferry dock, then sail across a channel before arriving on property. But being there is one of the most relaxed experiences anywhere—luxury here means getting to know staff on a first-name basis, finding tidy breakfast baskets outside your room before sunrise, leaving your bungalow door unlocked, “hijacking” the resort puppies for in-room cuddles, and watching rays zoom through the clearest waters you’ve ever seen. It’s less like being at a fussy, five-star oasis and more like visiting your wealthy friends at their home away from home.

When I first learned about Tourists Welcome, a converted motel in the tiny town of North Adams, Mass., I tried hard not to roll my eyes. Despite being a reference to the signs once donned by the area’s roadside inns, the name pained me, and the fact that it was owned by Wilco’s bassist and his friends made me skeptical of how it might deliver on anything other than Instagram bait. But I was curious, and a location within driving distance—plus last-minute availability over the Fourth of July—made it ideal for baby’s first vacation.

It took less than an hour for me to toss aside my assumptions and start drinking the Kool-Aid. Tourists Welcome brims with summer camp conviviality: Between outdoor cookouts, an indie-folk soundtrack, and a canteenlike front desk, it’s chill in all the right ways. It fosters an atmosphere where it’s oddly easy to strike up conversation with total strangers—and where families with kids of all ages can coexist seamlessly with weekending couples and celebrities. (In the spirit of the place, I’ll stay mum on which major TV star we ran into.) The service was unbuttoned but not slow; the design was comfortable but endlessly photogenic; and the saltwater pool was so warm, I watched my 2-month-old fall asleep in it (while lounging in a flamingo-shaped baby float, natch). Plus, there’s loads to do. We hiked a section of the Appalachian Trail one day and ogled giant Sol LeWitt murals at Mass MoCa the next.

It’s no wonder this single hotel became the must-visit spot of the summer for anyone within driving distance. The appeal is undeniable; it just happens to look good on Instagram, too.

While I initially thought a destination in a nearby time zone would make sense for our first big trip as a family of three, my desire to expose our daughter to Spanish—my first language­—and love for Europe set us on a more ambitious track. Now Mallorca is the place I can’t get out of my head. Its rocky, Tramuntana mountain range cuts along the northwest coast, and within its craggy peaks are nestled tiny, cobblestoned villages that look like Van Gogh paintings washed in Mediterranean light.

We split our time between Deia, a picturesque speck of a town where the spectacular Belmond La Residencia is based, and Port Soller, a slightly larger coastal village that’s especially popular with German beach-going families. At the former, we took lazy walks through olive groves and bought orange jam from a woman’s front porch—made with fruit from her own citrus trees. At the latter, we spent pool days at the cliff-top and family-friendly Jumeirah Port Soller, ate paella by the sea, and watched a particularly charming, 100-year-old tram pass by the boardwalk a few times a day.

The trip also marked baby’s first missed flight, thanks to an hourslong weather delay on our return flight to New York. And yet, getting stranded in Barcelona may have been the biggest blessing of all. We’d already spent a few days there at the beginning of our trip, happily cocooned in luxury at the spectacular new Almanac Hotel. But our delay coincided with the city’s biggest annual holiday, La Mercè, and all of the bustling streets we’d strolled were shut down to car traffic and filled with all sorts of festivities from concerts to parades. In a stroke of serendipity we witnessed competitions for traditional sardana dancing and gigantic human pyramids outside the city’s namesake cathedral—one of the coolest cultural experiences I’ve ever seen. For a planning-obsessed new mom, it was a refreshing reminder that the best things in life are often unscripted—and fully left to chance. 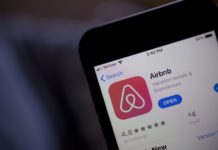 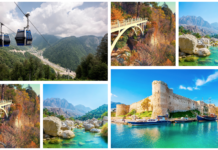 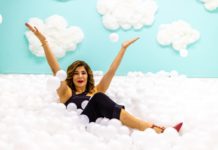 The Selfie Kingdom Opens In Dubai 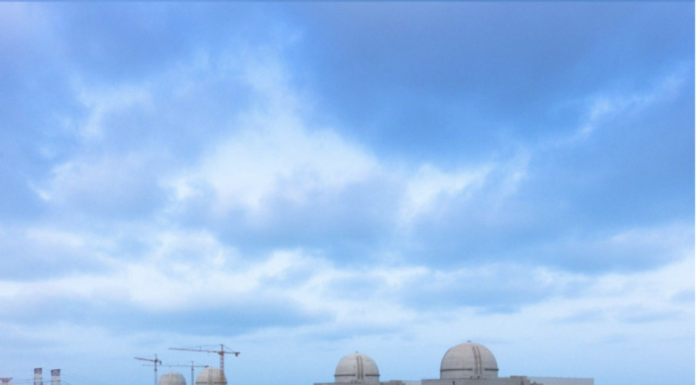