(Bloomberg) — The central banks of Japan and India stepped up moves to help their economies, while China’s leadership was forced to abandon a growth target for 2020 because of the uncertainty caused by the coronavirus.

The Reserve Bank of India cut interest rates in an unscheduled announcement. The Bank of Japan unveiled a new lending program for companies. China’s leadership, at an annual meeting of the National People’s Congress, pledged to use interest rate cuts among other tools to shore up growth, and detailed plans for special bond issuance.

Brazil had another record day of deaths, with 1,188 fatalities, while President Jair Bolsonaro reached a rare moment of consensus with state governors to back a financial aid package. China said it will strengthen international cooperation on research and development for coronavirus remedies and vaccines. Australia’s most-populous state moved to relax limits on cafes and pubs.

Sales volumes declined 18.1% from March, the most since records began in 1988, the Office for National Statistics said Friday. From a year earlier, sales fell 22.6%. The unprecedented decline shows the hit from the lockdown, but April’s reading may prove the nadir, as a broader swathe of shops reopen.

Meantime, the budget deficit stood at 62.1 billion pounds ($76 billion) last month, an amount equal to the total borrowing in the whole of the previous fiscal year. The monthly deficit is the most since modern records began in 1993. Even during the financial crisis, monthly borrowing was never more than 22 billion pounds.

Thailand will extend its nationwide state of emergency for another month through June, according to Taweesilp Witsanuyotin, a spokesman for the Covid-19 center. That will help facilitate the country’s reopening in stages three, which begins June 1, and four, Taweesilp said. Once stage four is completed, the government may consider reopening its borders.

India’s central bank cut interest rates in an unscheduled announcement on Friday, ramping up support for an economy it expects will contract for the first time in more than four decades.

The benchmark repurchase rate was lowered by 40 basis points to 4%, Governor Shaktikanta Das said in a live streamed address. The reverse repurchase rate was reduced to 3.35% from 3.75%. The monetary policy committee met ahead of its scheduled meeting in early June, Das said.

Australia’s most-populous state will allow pubs, clubs, cafes and restaurants to have as many as 50 customers from June 1, as authorities try to breathe life back into the economy.

Muller challenged for the leadership after two polls this week showed support for National plummeting to as low as 29%, from 46% just three months ago.

Muller now faces the daunting task of trying to dethrone Prime Minister Jacinda Ardern, whose crisis management during the coronavirus pandemic has seen her popularity soar. Support for Ardern’s Labour Party surged to 59% in a 1News/Colmar Brunton poll published yesterday, 30 percentage points ahead of National. The election will be held on Sept. 19.

The Bank of Japan launched a new lending program at a meeting on Friday. The meeting, announced earlier this week, occurred between regular policy-setting gatherings as the central bank sought to expand resources availble to small businesses.

Worth about 30 trillion yen ($279 billion), the new facility won’t offer direct assistance to businesses like the Federal Reserve’s Main Street Lending Program. Instead, it funnels money to companies via commercial banks and other financial institutions. The program encourages lending to companies by providing free loans to financial institutions and then paying them 0.1% interest on the amount they in turn lend out.

Combined with an earlier lending program and its buying of corporate bonds and commercial paper, the BOJ said its coronavirus response measures now total 75 trillion yen.

The Chinese government abandoned its decades-long practice of setting an annual target for economic growth amid the storm of uncertainty unleashed by the coronavirus pandemic, and said it would continue to increase stimulus.

“We have not set a specific target for economic growth this year,” the report said. “This is because our country will face some factors that are difficult to predict in its development due to the great uncertainty regarding the Covid-19 pandemic and the world economic and trade environment.”

Premier Li Keqiang said the government is setting a target for urban job creation of over 9 million jobs. That’s lower than the 2019 target of around 11 million, and a target for the urban surveyed unemployment rate of around 6%, higher than 2019’s goal, according to the document.

Japan’s key inflation gauge slid below zero in April for the first time in more than three years, stoking concern over the re-emergence of deflation before an emergency meeting of the central bank to strengthen lending for coronavirus-hit businesses.

International Business Machines Corp. cut an unspecified number of jobs across the U.S., eliminating employees in at least five states. The company declined to comment on the total number, but the workforce reductions appear far-reaching.

Based on a review of IBM internal communications on the Slack corporate messaging service, the number of affected employees is likely to be in the thousands, said a North Carolina-based worker who lost his job along with his entire team of 12.

It’s unclear how many of IBM’s cuts are caused by the pandemic; the company has suffered years of falling revenue. But the tech industry has suffered widespread job losses after the coronavirus pandemic triggered a severe recession. Airbnb Inc. and Uber Technologies Inc. have cut about a quarter of their workforces. Earlier on Thursday, Hewlett Packard Enterprise Co. said it will eliminate some employees to save money, while Dell Technologies Inc. suspended several staff benefits.

Australia’s AAA credit rating outlook was cut to negative by Fitch Ratings Ltd., reflecting the economy’s spiral toward a recession that will result in a severe deterioration of the nation’s fiscal position.

“Government spending in response to the health and economic crisis will cause large fiscal deficits and a sharp increase in government debt/GDP,” Fitch said in a statement. “The ‘AAA’ rating reflects the sovereign’s strong institutions and effective macroeconomic policy framework, which has supported a long record of stable economic growth prior to the current exogenous shock.”

Abbott Laboratories said an ongoing study showed that its ID NOW Covid-19 test had a high rate of accuracy, as the company attempts to counter a claim by outside doctors that the test may return too many false negatives.

Partial data from the company-funded study showed that it accurately detected the virus 94.7% of the time, and correctly gave negative results 98.6% of the time, Abbott said in a statement. The study, which is ongoing, analyzed samples from 256 patients and compared the results to a test developed by the U.S. Centers for Disease Control.

The US Food and Drug Administration said on Thursday that 27 antibody tests will no longer be distributed in the U.S., part of a previously announced crackdown on the tests.

Antibody tests look for markers in the blood that indicate exposure to the novel coronavirus. However, unlike diagnostic tests, they can’t determine whether a patient has an active Covid-19 infection. The FDA’s previous policy allowed hundreds of antibody tests to be sold without its oversight, prompting criticism of the tests’ accuracy.

The 27 tests either had “significant problems” identified with them or their manufacturer didn’t seek authorization, according to the FDA. Nine antibody tests were voluntarily withdrawn, including one from BioMedomics, Inc., the FDA said. It also said that there will likely be updates to the list with more tests being barred.

In a statement, FDA Commissioner Stephen Hahn called it an important step “taken to ensure that Americans have access to trustworthy tests.”

Coronavirus cases in the U.S. increased 1.5% compared with the same time yesterday, to 1.56 million, according to data collected by Johns Hopkins University and Bloomberg News. That’s higher than Wednesday’s growth rate of 1.3% and in line with the 1.6% average over the past seven days. Deaths rose 1.3% to 93,863.

Germany and Russia urged the United Nations to partially reopen its New York City headquarters as the secretary general proposes to scale back the annual General Assembly meeting in September.

Germany, which will hold the presidency of the UN Security Council in July, wants to “discuss a possible return to real meetings” while reducing staff on hand and sticking to social-distancing guidelines, Ambassador Christoph Heusgen wrote in a letter to Secretary-General Antonio Guterres seen by Bloomberg News.

Guterres has taken a cautious approach to reopening the headquarters tower along the East River.

A new report from the Imperial College London estimates that 4.1% of the U.S. has been infected by the novel coronavirus, with a wide variation between states. In New York, the world’s epicenter, the researchers estimate that 16.6% of the population has already been infected.

The researchers conducted their first state-by-state analysis of the U.S., modeling the number of people infected, the number of those who are currently infectious and the average number of secondary infections caused by individuals with Covid-19. The report warns that certain regions, such as the South and Midwest, may be more susceptible to a resurgence of transmission in coming months.

“The epidemic is not under control in much of the U.S.,” say the researchers. “We find no evidence that any state is approaching herd immunity or that its epidemic is close to over.” 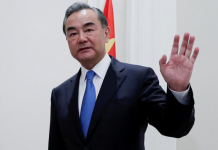