(Bloomberg) — It’s election season in India. The South Asian nation is preparing to hold general elections in April and May, in which about 900 million Indians — more than the population of all the countries of Europe combined — will cast their votes to select a new federal government. 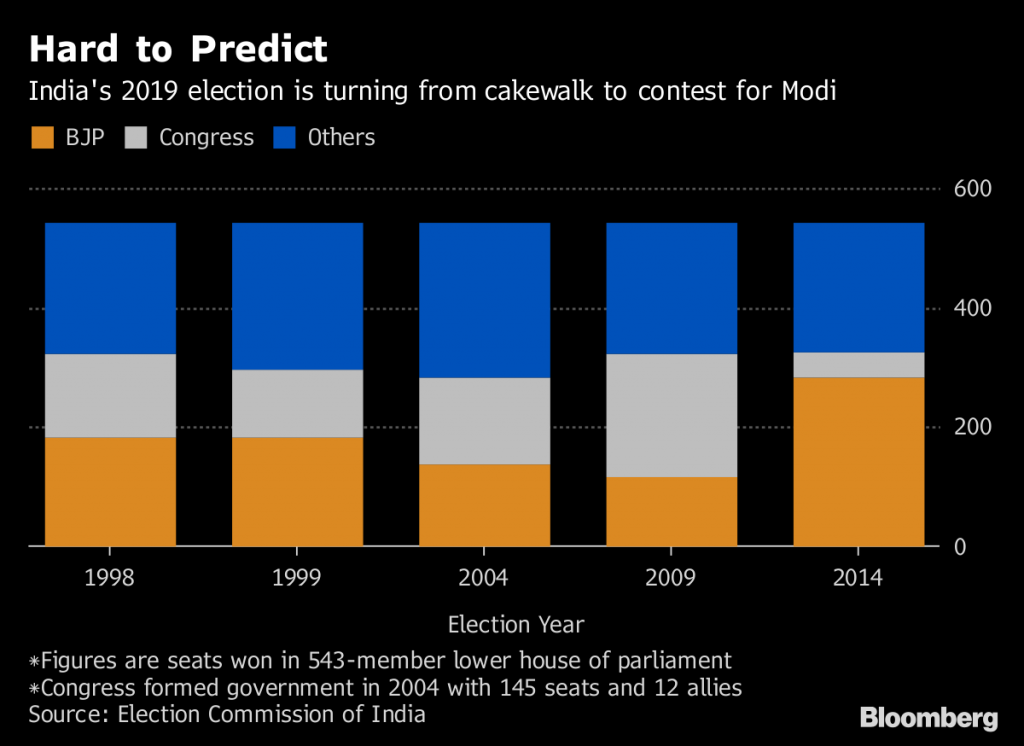 India’s elections have been notoriously difficult to predict because of the endless possibilities of coalitions. It will be no walk in the park for Prime Minister Narendra Modi to retain power — after five years in office his popularity is receding over concerns about his government’s failure to create the promised millions of jobs and as well as a lag in economic development.

But it’s no cakewalk either for the opposition Congress party — led by Rahul Gandhi — and its allies to snatch power as they have yet to gain traction with the electorate. Add to that, the political scene will become even murkier when the powerful regional parties spell out their strategy on multi-party alliances. Contributing to the uncertainty, it’s difficult to fully trust India’s opinion polls as they have repeatedly failed to predict outcomes.

Voters are electing lawmakers for the 543-member lower house of parliament, or Lok Sabha. In 2014, the Election Commission of India deployed 3.7 million polling staff, 550,000 security personnel, 56 helicopters and 570 special trains to conduct a five-week-long exercise in close to a million polling stations.

In a multi-party democratic system, India had 1709 registered political parties, of which 464 fielded their candidates in 2014. In the last election, the federal government spent 38.70 billion rupees so that 834 million electorates could choose their parliamentary representative from 8251 candidates.

Divided into 29 states and seven federally-administered territories, and with a population of more than 1.3 billion, India’s poll will take place in seven phases between April 11 and May 19, with results announced on May 23.

Opinion: India and Pakistan Have Lost Control of the Narrative

Holding elections in world’s seventh largest nation by area and second most populous country is humongous and complex.

Millions of poll workers, police and security personnel are deployed in cities, towns, villages and hamlets. They use planes, boats, trains, helicopters, elephants, and camels and travel by foot to reach far flung voters, from the snow-capped Himalayan mountains in the north to tiny islands in the Arabian Sea to the south, the desert in the west and the deep forests in the east.

This time, the commission will mobilize 11 million officials to conduct the election at 1.04 million polling stations which will use over 2 million electronic voting machines.

The Election Commission allots symbols to political parties — from elephants and arrows to combs and bananas — to help voters easily identify candidates.

Polling staff who trek to isolated and far flung hamlets in snowbound areas in Himalayas are forced to carry oxygen cylinders, sleeping bags, food, torches, as well as electronic voting machines and indelible ink to set up polling booths.

The commission sets up a polling booth for a lone voter in the Gir forest in western state of Gujarat, where lions roam. It also protected a polling station in Chhattisgarh by deploying a medical team to prevent a swarm of honeybees attacking voters.

In 2014, one 98-year-old man in Himachal Pradesh trudged several miles to vote — a tradition he has kept up since first poll held in independent India in 1951.

More and more women are coming out to vote. Women outnumbered men at polling booths in half of India’s states in 2014 in an election that created history with the highest ever female voter turnout of 65.63 percent. 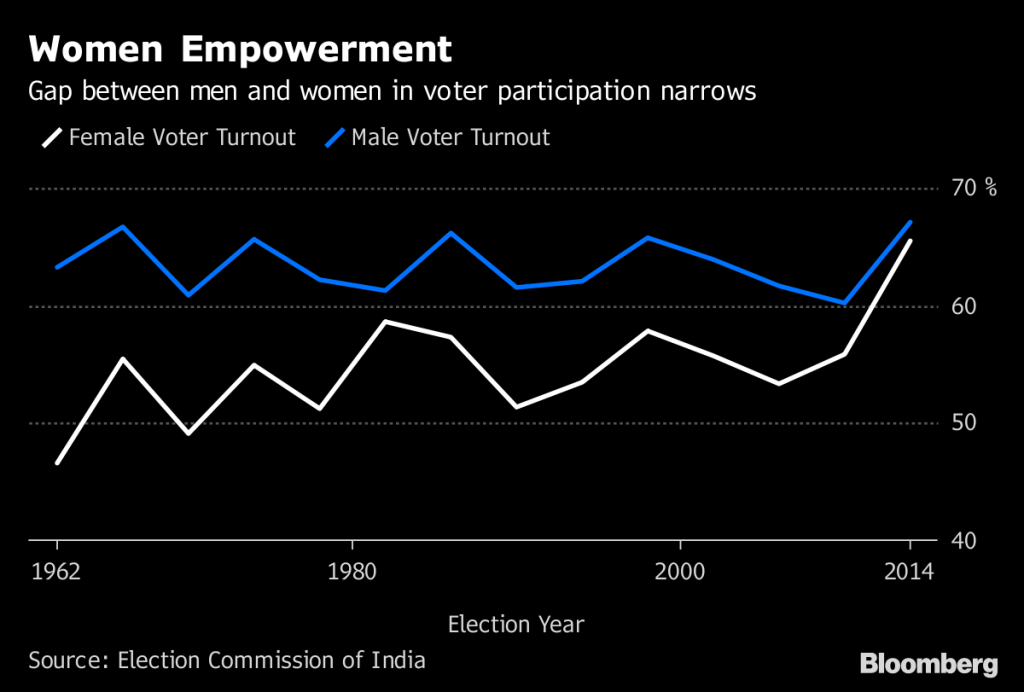 Still women do not have equal representation in parliament — they make up only 11.42 percent of lawmakers in lower house despite constituting 47 percent of the electorate.

There will be 15 million voters aged 18-19 years voting in this year’s poll and millions more first time voters.

As they’re better informed, more educated and tech-savvy than older constituents, and more willing to take a different direction from their family’s established political leanings — they could swing the outcome.

Candidates have traditionally used posters, banners and campaign songs and traveled in purpose-built vehicles that look like chariots to win over voters.

But now 430 million Indians own a smartphone, half a billion use the Internet, 300 million use Facebook, 200 million send messages on WhatsApp and 30 million are on Twitter. It means political parties and candidates will aggressively use new technology and social media to win the hearts and minds of young voters. The possible misuse of these platforms remains a significant concern for the election commission.