(Bloomberg Opinion) — It’s the overriding question about foldable phones: can they survive all that… folding?

The answer seems to be no. Take Samsung’s new foldable handset. According to early reviews, it stopped working within just two days. That’s an ominous sign for the smartphone industry, which had been hoping the technology would provide its next growth spurt.

Samsung is expected to release the Galaxy Fold on April 26 in the U.S. at a price of $1,980 – roughly a third more than the most expensive iPhone. The device’s party trick? It folds open to reveal a 7.3-inch display, only slightly smaller than Apple Inc.’s iPad Mini tablet.

But Bloomberg News reporter Mark Gurman found that defects quickly emerged on the larger screen before it ultimately failed completely. He had removed a plastic film resembling the temporary protective layer that users typically peel off their new smartphones.

Others had similar issues. Samsung subsequently told reviewers that the film was intended to be permanent. Either way, it looks like a major design flaw.

The obvious point of comparison is Samsung’s Galaxy Note 7, which the South Korean company had to recall by the millions in 2016 after its batteries spontaneously burst into flames. The affair didn’t have any sustained impact on Samsung’s fortunes.

But if the issue with the Galaxy Fold proves to be widespread, its implications could be more severe. Not so much financially, because the company only expects to sell one million of the handsets this year – a rounding error compared with the 292 million smartphones it sold in 2018. The bigger risk is that a bungled launch of a product that isn’t ready poisons consumer appetite for all foldable handsets.

Samsung and many of its rivals have been gambling on the new form factor too, if not prompt a wave of new purchases, then at least allow them to raise their average prices. Smartphone sales have been slowing since their 2016 peak. 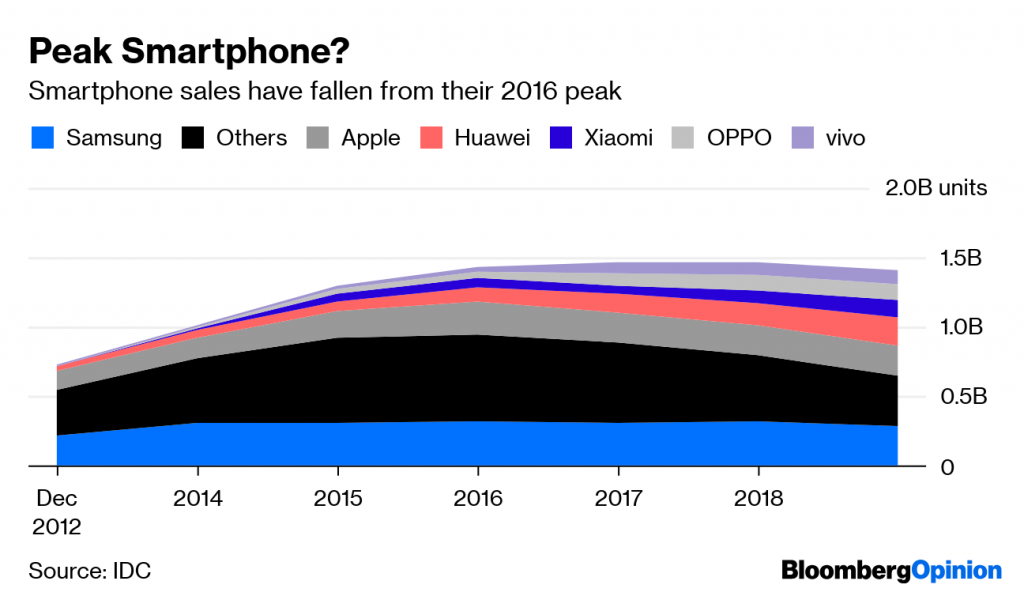 Consumers are increasingly satisfied with the handsets they already own, so are replacing them less regularly. That’s why firms were developing foldable screens: Huawei Technologies Co. has its own competing model, while Xiaomi Corp. and Lenovo Group Ltd.’s Motorola are also working on the technology.

Samsung is easily the most significant of these players. Not only because it is the world’s biggest seller of smartphones, but also because it sells its technology to others, not least Apple. By some estimates, in fact, Samsung made more profit from supplying the iPhone X’s organic light-emitting diode display than it did from its own Galaxy S8. If Samsung gets the foldable tech right, then Apple could well use it in a future iPhone.

Samsung’s nightmare would be if the Galaxy Fold became another Google Glass. The smartglasses, released in 2013, proved an abject failure. The technology wasn’t ready and pushed the appetite for augmented reality eyewear back by years. Foldable phones are different – they have far more obvious uses – but Samsung has to be careful not to kill the market before it even starts.