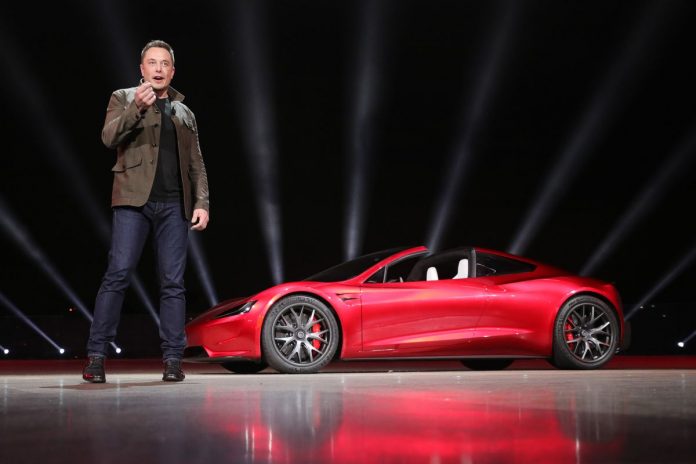 With the very act of typing these words, I may be creating a singularity; an infinity mirror of a column. Possibly, I have oversold it already. But here’s a risk factor from Tesla Inc.’s 10-K filing, which dropped Tuesday morning:

Tesla is a highly-visible public company whose products, business, results of operations, statements and actions are often scrutinized by critics whose influence could negatively impact the perception of our brand and the market value of our common stock.

Tesla is a highly-visible public company whose products, business, results of operations, statements and actions are well-publicized. Such attention includes frequent criticism of us by a range of third-parties.

Our continued success depends on our ability to focus on executing on our mission and business plan while maintaining the trust of our current and potential customers, employees, stockholders and business partners.

Any negative perceived actions of ours could influence the perception of our brand or our leadership by our customers, suppliers or investors, which could adversely impact our business prospects, operating results and the market value of our common stock.

See? Just by pasting that in and stringing some words around it, I am indulging in the very scrutiny it describes. You can’t see this, but I just sat back and stared out the window, thinking about that for a minute.

As risk factors go, I’ve got a couple of observations about this one. The first is it reads somewhat generic even by the boilerplate standards of risk-factor sections in SEC filings. There are a lot of “highly-visible” public companies that get “scrutinized.”

It comes with the territory of being public and of a certain size. As a thought experiment, go to the polar opposite of the energy world, Exxon Mobil Corp., and consider whether it is a “highly-visible public company” subject to “frequent criticism … by a range of third-parties.” It does get criticized (for my part, see this example). Read its risk factors, though, and the nearest parallel you’ll find is a point about “reputation” and how damage to it from the company’s own actions could have an adverse impact.

The second observation is that it draws attention to something that has characterized Tesla for a while now; namely, its identity as an emotional construct. Almost a year ago, it emerged that the company’s VP of production had sent around an internal email urging employees to boost flagging output of the Model 3 in order to “prove a bunch of haters wrong.”

As I wrote then, motivating the base by identifying an adversary is a fairly established strategy (look around, folks). But in Tesla’s case, it also serves to underline how central the debate about the company’s valuation appears to have become in setting corporate goals. That’s an unhealthy development (see this for more thoughts on that).

This aspect reached an apotheosis of sorts with last summer’s “funding secured” debacle, when CEO Elon Musk’s obsession with short sellers apparently boiled over. His tweeted hope that a buyout “ends negative propaganda from shorts” became part of an SEC lawsuit against him and Tesla, as the buyout was a rather sketched-out affair that ultimately was fodder for the shorts. The irony here is that this episode rather undercuts the rest of that risk factor language about “focus,” maintaining “trust” and the damage that could arise from “any negative perceived actions of ours.”

I get it: Just pointing out these unhelpful aspects makes me part of the problem. Against that, the fact that Tesla’s stock trades at more than 200 times 2019 GAAP earnings forecasts suggests scrutiny hasn’t exactly derailed the bull case here. Makes you wonder why the company went out of its way to give a shout to the “critics” in the first place.