Omani influencers, Mohammad Al Balushi ‘Hamaky’, and Youssef Al Akhzami have successfully joined 20 influencers from across the Middle East to compete in the second season of the content creation competition, Sadeem.

The competition was officially launched on March 2 across Sadeem’s social media channels and website.

Al Balushi and Al Akhzami will compete for the OMR 100,000 grand prize and the title of being one of the best influencers in the region. The winner will also have a chance to produce their own programme on social media.

The two Omani participants produce different content and cater to different audiences. Al Balushi previously worked as a milk truck driver and as a treasurer at a commercial center. He currently works as a nurse at a psychiatric clinic. Al Balushi has gained traction as a comedic social media influencer, with 416K followers on Instagram, and around 30K followers on Youtube.

The second Omani participant, Al Akhzami, is an avid traveller and food enthusiast and has curated his content to share his travels and interest in different cuisines. A former engineering student, Al Akhzami is now studying law and has around 4,000 followers on Instagram and Youtube. With a rising number of followers, Al Akhzami, was able to be listed as a finalist on Sadeem.

Read: You will never believe how much these beauty influencers make

Sadeem aims to build up the confidence of its participants, so that they can bring about positive change in their communities through the content they create. This season’s participants will have the opportunity to meet with the biggest influencers and experts, including being introduced to global media giants from YouTube, Facebook, Twitter and Instagram, and will learn tricks of the trade from them.

The jury members this season are comprised of some of the most influential social media personalities in the region. The judges include Dezad Joker from Algeria, Zap Tharwat from Egypt, Ascia Al Faraj from Kuwait and Ahmed Sherif from Bahrain. The programme is presented by Sherif Fayed from Egypt.

Kuwaiti social media influencer, entrepreneur and Sadeem judge, Ascia, remarked, “We will work on evolving the skills of the participants by sharing our expertise and holding workshops throughout the season.”

Bahraini influencer, Ahmed Sherif, who is also a judge in the competition, said, “I predict that it will be a fierce competition this year. The participants have benefited from observing the first season and have a better sense of what to expect in the competition. It will be more intense for us judges to choose who will be the best content creator in season 2 of Sadeem.”

Episodes from season 2 of Sadeem will be aired on Saturday and Sunday through Sadeem’s social media channels and on sadeem.com 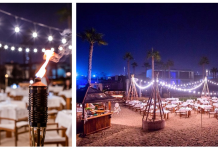