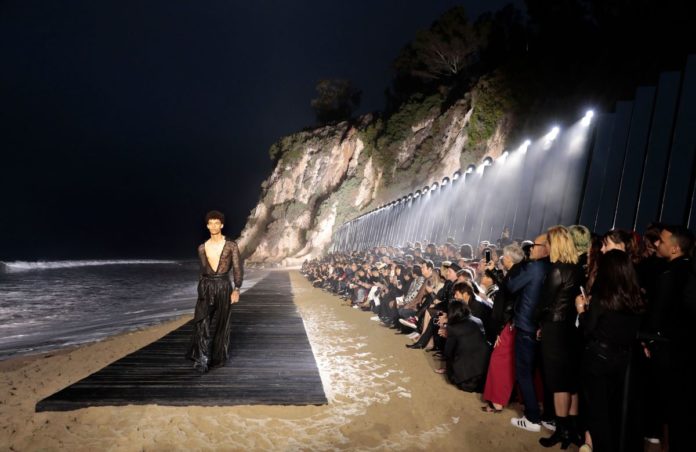 (Bloomberg) — On a full moon at high tide each spring, schools of grunion fish flop out of California’s coastal waters to spawn in the sand.

The beaches had a different set of attendees on one misty June evening: an army of spindly young men wearing Saint Laurent’s latest collection, including gauzy button-ups, crystal-studded blazers and pointy leather mules. The models paraded just a few feet from the breaking waves of Malibu’s Paradise Cove as journalists, stylists and celebrity guests flashed their smartphones in appreciation.

The grunion were nowhere to be seen, an absence that generated angry complaints and letters from Malibu townspeople and officials. In their sight lines: Kering SA, owner of the Saint Laurent brand. The company has positioned itself at the forefront of a movement to clean up fashion’s environmental impact but flew in participants from around the world, releasing thousands of pounds of carbon dioxide.

The luxury-goods business is walking a high wire. Fierce competition for consumer dollars and for social media attention is pushing brands to produce ever-flashier events. Surging demand from China has lifted production to unprecedented levels—meaning the manufacturers are using up more natural resources, such as metal hardware, leather skins, and cashmere, than ever before. At the same time, the industry is facing more pressure from consumers and regulators to curb the environmental impact of its rapid growth, heavily polluting supply chain and loose control of suppliers.

“You have regulators, consumers, and more and more the investors who are making environmental and social criteria an important red flag,” said Mario Ortelli, a London-based luxury consultant.

The industry is starting to wake up. Apparel makers including Giorgio Armani SpA and Versace have discontinued the use of controversial materials, like fur. Burberry Group Plc vowed recently to stop destroying unsold stock, a widespread practice in the fashion industry to avoid unwanted products being spotted in bargain bins. Industry giant LVMH, the owner of Louis Vuitton, Christian Dior and Dom Perignon Champagne, in July bought a stake in Stella McCartney’s fashion label, known for working with sustainable materials such as biodegradable shoe soles. Prada SpA has said it wants to source all of its iconic nylon accessories from recycled materials including ocean waste by the end of 2021.

Leading the way is Kering, Saint Laurent’s owner, whose other brands include Gucci and Balenciaga. Chairman Francois-Henri Pinault is working to rally global fashion companies around a new sustainability pact. French President Emmanuel Macron has put the issue on the agenda of the Group of Seven summit he’s hosting this month in Biarritz, tapping Pinault to spearhead the initiative. The Kering boss is trying to get companies to sign on to targets that could include eliminating single-use plastics and accelerating their transition to renewable energy.

While Pinault’s brands spin a dream of luxury, he’s also made sure that more and more of the looks on display are produced from organic cotton, traceable leather skins or recycled plastic.

Kering says it’s also pressuring its networks of suppliers and sub-suppliers to open up about where exactly their raw materials come from, and imposing higher standards on energy efficiency and animal welfare. In an industry where leather goods drive profits, Pinault is pushing tanneries to invest in new processes for turning animal hides into supple handbags without employing chromium, a pollutant whose use remains widespread. Executives at Kering have even seen their bonuses tied to environmental performance since 2010. 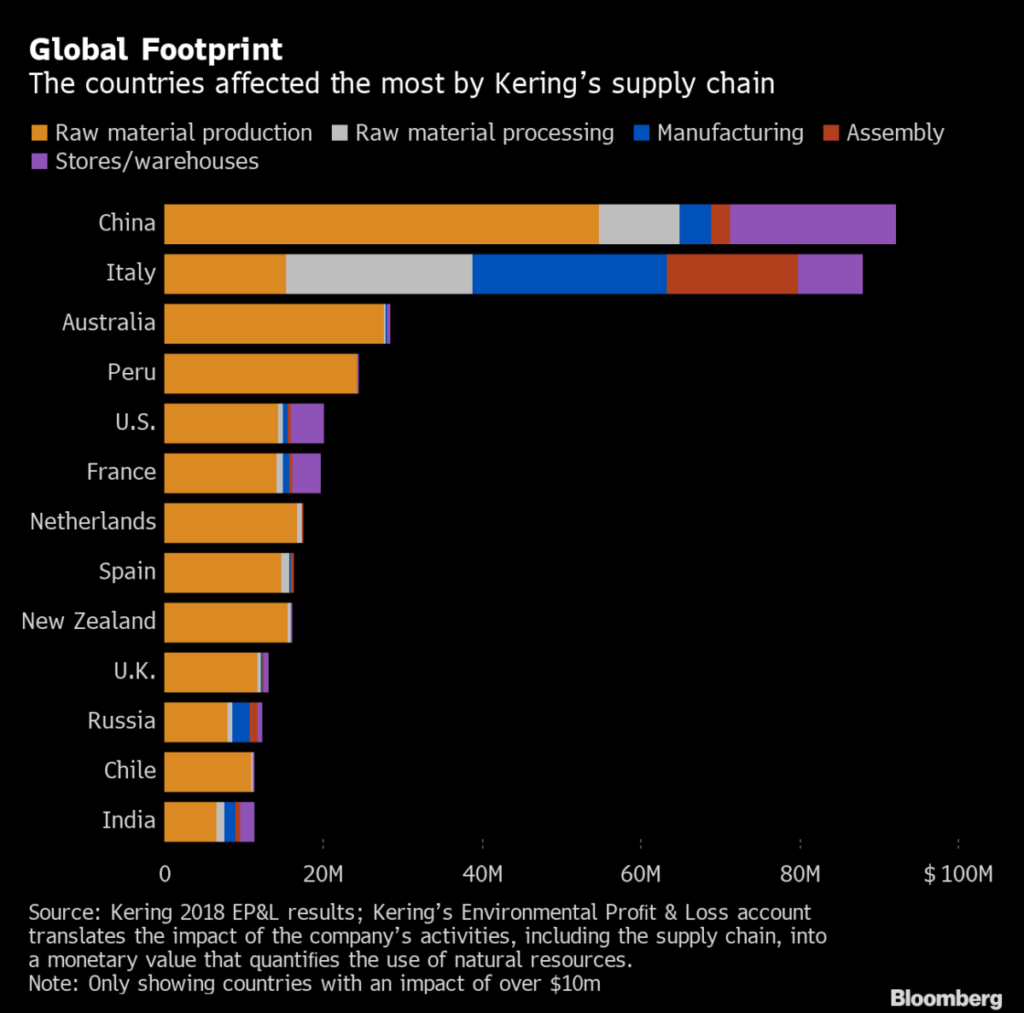 “We shouldn’t wait for people to require us to use different materials before figuring out how,” Pinault said in an interview. “It’s up to us to come up with products that are respectful of the environment.”

Consumers may associate pollution and waste in the apparel industry with fast-fashion retailers or sneaker makers, whose supply chains often lead to massive factories in loosely regulated countries where labor is cheap. But now the spotlight is widening to fall on luxury companies, too, as a new cohort of young, wealthy clients looks to avoid glamorous products that come with an unsavory backstory.

Millennials and Generation Z will account for four-fifths of the luxury industry’s growth in the coming years, Jefferies analyst Flavio Cereda said in a July report. Three-quarters of millennials said they’d alter their buying habits on environmental concerns; the comparable figure for baby boomers was 34%.

As in the aftermath of Saint Laurent’s Malibu show, social media and smartphones have made it easier for criticism of the industry’s environmental sins to spread. Previous triggers included videos of suffering crocodiles or cashmere goats at sites that supplied leather or wool for luxury brands. Burberry’s burning of millions of dollars worth of unsold merchandise prompted some shareholders to demand change.

More than any other company, Kering illustrates the luxury industry’s tension between needing to sell a dream of excess and indulgence while assuring consumers it can be done without hurting the planet. The French luxury group’s blockbuster turnarounds at Gucci as well as Saint Laurent and Balenciaga have seen earnings more than double since 2014, but Kering is still viewed as a scrappy upstart in comparison to stalwarts such as Hermes International or the much larger LVMH. Investors in the Gucci owner have learned to expect rapid quarterly growth—so improvements to environmental impact are easily offset by the rising volumes.

While LVMH has been tackling the same environmental challenges behind closed doors, Kering and Pinault have opted to speak about them openly. The company’s “environmental profit and loss” accounting allows anyone to view where and how its supply chain is affecting the environment, whether it’s intensive land use at cashmere farms in Mongolia or water pollution from Bolivian mountain mines, where silver is extracted for jewelry. This allows the Gucci owner to convert its environmental impact to a dollar amount—just over 500 million euros ($554.8 million) last year, Kering estimates. The goal is to reduce the environmental impact relative to sales by 40%. 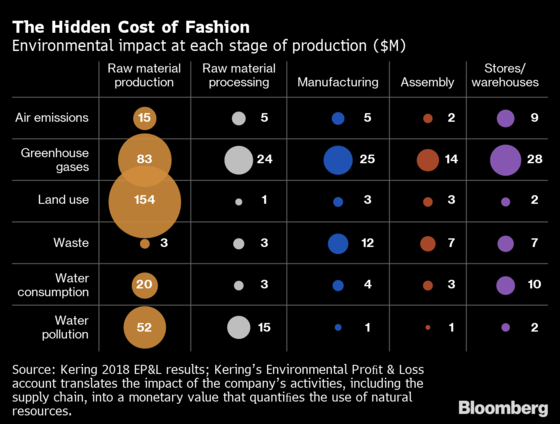 Half of that would come from implementing better practices throughout supply chains, as well as boosting the use of more sustainable materials like organic cotton. The other half would need to come from yet-unidentified innovations.

Even if Kering were to reach its target, the frenetic growth rate of the fashion industry, particularly for successful brands such as Gucci, means that it would still be a long way from reducing the impact in absolute terms.

A report in May by the Global Fashion Agenda, a group that’s campaigning for a more sustainable industry, found that efforts to lessen the environmental impact aren’t keeping up with growth. Annual production of clothing and footwear, on track to reach more than 100 million tons by 2030, will exert “an unprecedented strain on planetary resources,” the report said.

“Fashion is an industry that knows it’s unsustainable, and luxury is at the top of that value chain,” said Michael Stanley-Jones, co-secretary of the UN Alliance for Sustainable Fashion. The textile industry is the second-biggest polluter of water, and fashion accounts for 8% of carbon emissions worldwide, a share that’s rising. “You’re seeing runaway growth that’s pretty aggressive. It’s alarming.”

The steps most crucial to progress in sustainability are often the most difficult to control. Brands as prestigious as Gucci still struggle to figure out where their raw materials actually come from. “Made in Italy” and made “in-house” are two different things, and even top-end brands have had to fight an uphill battle to gain visibility into the vast network of contractors and subcontractors involved in making every look.

Verifying that cows are being raised humanely and that breeders used land responsibly would require being able to trace a leather hide back to the farm. Currently, Kering can only trace it to the slaughterhouse.

“One particularity of the fashion industry is that we’re not vertically integrated,” Pinault said. “I don’t own the cotton fields. We aren’t spinning thread.”

If Kering is willing to speak openly about its environmental challenges at the corporate level, its brands are often less eager to do so with consumers. Gucci has raised the share of metal-free tanning in its handbags from 0.2% to 13%. That leaves a majority of the brand’s leather still made with potentially toxic chromium—not a great marketing pitch.

At a Gucci boutique next to Paris’s Place de la Concorde, products made with more eco-friendly materials have been quietly mixed in with the items on display. Best-selling products like a cardinal-red Dionysus handbag—a 1,980 euro model recognizable for its serpent clasp—are prominently displayed but bear no tags telling shoppers that they’re now tanned without the use of potentially toxic chromium. Nor will you find any indication that the palladium hardware on the new Zumi handbag line is sourced from recycled medical equipment.

Slowly, however, brands are starting to respond more openly to sustainable fashion demand. Gucci, for example, publishes its environmental policy on its website. Kering’s Bottega Veneta, known for its expertise in high-quality leathers, is introducing alternatives under its new designer, Daniel Lee. An upcoming collection includes pouches and cross-body bags made out of pressed cork and fennel. At Kering’s Materials Innovation Lab, one executive has spent years building a library of sustainable materials, lobbying brands to implement them in their collections as well as pushing the suppliers to adapt them to better suit their needs. One recent initiative by the lab involves working with U.S. cotton trade group Supima to roll out cotton with a documented “chemical fingerprint.” That allows a swatch from a poplin shirt to be traced all the way back to the farm.

Sustainability and traceability initiatives that started as “risk management” for the fashion industry will eventually become drivers of value and a competitive advantage, consultant Ortelli said—even if most consumers aren’t paying attention yet. Companies that don’t invest in reining in their environmental footprint deeper in the supply chain will likely struggle to compete in the future, he said.

“Today there is a lot of talk about the issue of sustainability,” said Luca Solca, luxury analyst at Sanford C. Bernstein. Meanwhile there’s “not much of a way to tell” which brands are actually investing in turning that talk into action.

As for the Malibu event a city spokesman said Kering cleaned up plastic sandbags and water bottles afterward.

Soon Pinault and other fashion leaders are headed for another beach—Biarritz—for the G-7 summit. At the behest of Macron, they’ll present new commitments for improving their impact on climate change, biodiversity, and oceans.

Turning around the fashion industry’s growing environmental costs in absolute terms is still far from sight, though. That means the tough decisions are still to come.

“You shouldn’t underestimate the work that’s being done at different companies,” Pinault said. “The problem is that we’re all working in our little corners, so despite our efforts everything we do is completely offset by the growth.”

–With assistance from Samuel Dodge.