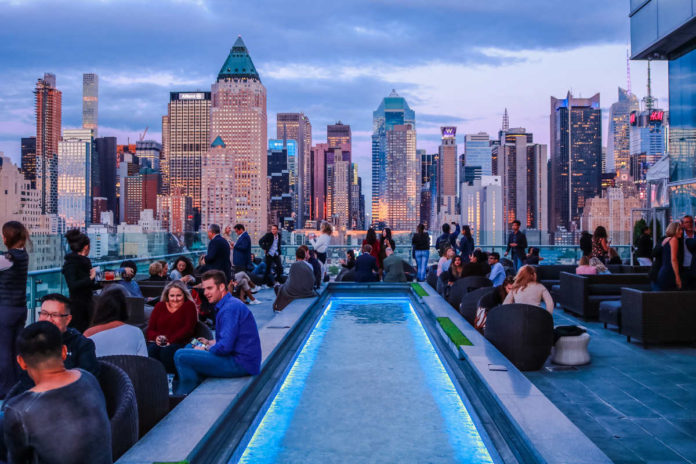 (Bloomberg) — New Yorkers like to eat out. They spend 130% more money grabbing food outside the home (like amazing sandwiches) than do residents in the rest of the country, according to real estate firm CBRE. Big Apple residents fork over an average of $8,082, compared to $3,512 outside the city.

CBRE also reports that 35% of the city’s food and beverage leases have gone to fast-casual places since 2016.

Europe, too, is on a fast-casual fast track. The market is expected to grow to around $17 billion by 2024, according to Report Linker, at an annual growth rate of 6%, thanks to demand for quicker meals and high-tech innovation and an interest in foods around the world.

In New York, the fast-casual trend also serves the purpose of opening culinary doors to the world. For under $20 and just a few minutes of your time, diners can experience Chinese bing bread, Taiwanese oyster omelettes, or Georgian khinkali dumplings. Cuisine that was outside the mainstream in the city, such as Senegalese and Peruvian, is easier than ever to get your hands on.

Read: Best Foods and Restaurants to Try in Dubai

New Yorkers have been looking beyond the burger option for a long time. Xi’an Famous Foods, which put northwestern Chinese hand-pulled noodles on the map, started its expansion out of Flushing, Queens, in 2010; Taim, from chef Einat Admony, has offered superb falafels since 2005.

But there has never been a better time than now to eat a $15 lunch at your desk (or a not-too-fancy table or counter.)

Here are a dozen of the hottest places around Manhattan to feel as if you’ve taken a trip much farther away.

Star chef Eyal Shani, who also has the riotous, and pricey, party restaurant Ha’Salon, dedicates much of Miznon’s menu to pillowy pita breads, which he stuffs with rib-eye steak slathered with tahini and spicy peppers, as well as a za’atar-spiced omelet with salty pickles and giant hunks of roasted cauliflower. Besides its Chelsea Market home base and Upper West Side outpost, Miznon has a spot at the upcoming food hall in the CitiCorp building at 601 Lexington Ave. ”My idea is to take high-end food and put it in a pita instead of a plate,” says Shani, whose sandwiches start at $8. “By the way, pita is the best bread, it’s like the most genius envelope for everything.” 435 W. 15th St. and other locations

Senegalese culinary ambassador chef Pierre Tham has an ideal location for his café: the Africa Center on upper Fifth Avenue, across from Central Park. His menu introduces customers to such ingredients as fonio (a West African grain hailed as a superfood) and attieke (fermented cassava couscous) with accompaniments such as ndambe, a stew of sweet potatoes and blacked eyed peas. There’s also the option of more straight forward garlic- and lime-laced grilled chicken, and lattes in flavors like turmeric and moringa. 1280 Fifth Ave.

This growing chain dedicated to northern Chinese cuisine, specifically noodle bowls and wraps made with the flatbread, bings. It was co-founded at Yale University by Yong Zhao and chef Lucas Sin, who met at Sin’s renegade supper clubs; the first Junzi opened near the campus in New Haven, Conn. Junzi now has multiple locations in Manhattan, with the latest in Bryant Park.

They are serious enough about their noodles to offer a choice between “knife” noodles—wide and wavy and excellent with options such as tomato and egg sauce pork—and the thinner, chewier “spring” noodles, which are great with spicy sesame oyster mushrooms and other vegetable dishes. “Remember when eating tacos and burritos felt like an adventure? That’s what we want to make happen with bing wraps,” says Sin. 135 W. 41st St. and other locations

During the day, James Beard award-nominated chef Erik Ramirez specializes in counter service rotisserie chicken with a spicy aji verde green sauce and the Peruvian fried rice, arroz chaufa, at this West Village offshoot of Williamsburg hotspot Llama Inn. The small sandwich selection includes caramelized pork shoulder with slices of sweet potato and salsa criolla, a red onion relish on a sturdy roll for around $14. At night, Llamita becomes a full service restaurant offering braised chicken with aji panca and a $26 pork chop, instead of a sandwich. 80 Carmine St.

Many fast-casual dishes are delivered in bowls. Food from the nation of Georgia in the Caucasus politely rejects that constraint. The airy storefront on Manhattan’s West 14th Street specializes in the cuisine’s notorious khachapuri bread pockets that have launched a million Instagram pictures, stuffed with cheese and presented to go in a small pizza box. Other regional options include khinkali, doughy, folded dumplings that can be stuffed with chopped beef and pork, or more cheese. Because this is a casual restaurant, not a grab-and-go spot, there’s also a strong selection of Georgian wine. 149 W. 14th St.

It’s only a matter of time before fast casual food that’s not made by a robot will be the exception. For now, an early entry in the city’s robotic restaurant game is Dalup, which has a machine for making dosas, the giant, thin, pancake-like wraps. It stars in the classic masala dosa filled with spiced potatoes and onion; there are also non-robot-made dishes such as bowls with a base of rice or the whole grain freekeh, and the option of a curry like chicken tikka masala or lamb madras. To amplify the mechanized POV, the place donates a portion of its profits to Girls Who Code. 350 7th Ave.

No single specific cuisine is highlighted at the brand new Field Trip in Harlem. The brand-new place is all about rice ,which notable chef JJ Johnson (formerly of Henry, at the Life Hotel, and Cecil’s— and our own holiday entertaining guide) believes is a through-line on tables around the world. Bowls include crispy chicken with sticky barbeque sauce and Carolina gold rice, braised beef with spicy black beans and Texas brown rice, and shrimp with green curry sauce and sticky rice. Even the dessert nods to the mantra; it’s not rice pudding but rice milk hibiscus soft-serve. 109 Malcolm X Blvd.

Coconut milk rules at this Thai spot in east midtown. The menu offers a short list of flavorful curries, including lemongrass chicken, coriander steak, and baked sesame tofu. Diners have the option of jasmine rice or shredded cabbage as a base, as well as curries that pack a punch, such as the Kati signature with lemongrass, galangal (a ginger-like herb), turmeric, and a serious amount of chili. There’s also penang, with dried chili and galangal, as well as cardamom and tamarind-infused massaman. 162 E. 55th St.

Taiwanese food hasn’t made as much noise in New York as some other Asian cuisines, but now it’s breaking out, thanks to places like Zai Lai. Located in the Turnstyle Underground Market just off Central Park, this place from chef Edward Huang offers “Street Eats” such as fried scallion pancakes rolled around slow-braised beef chunks and “ex-girlfriend’s oyster omelet” (a cleverly named version of one of Taiwan’s most iconic dishes). Among the rice bowls are “lion’s head” pork meatballs with ginger and scallions and the option of a sous-vide cooked egg on top. Beverages are traditional, from taro milk tea to sarsaparilla, Taiwanese root beer. 1000 8th Ave.

Inday is a groovy, Indian-accented bowl food place that hypes Ayurvedic principles. The Go Go outpost in Midtown is an express spot with a superfood roti, or wrap, made from coconut and flax and chia seeds that can enclose fillings such as braised lamb with chopped greens, pickled vegetables, and sliced avocado. The signature bowls include a lot of buzzword ingredients like curry flower (cauliflower rice with turmeric lemongrass curry) with additional protein options; dishes start at $7.50. Inday’s “side hustle,” or sides, include such more conventional Indian offerings as spiced chickpeas; to drink, there’s hot masala chai spiced with cardamom and cinnamon. 570 Lexington Ave.

There’s a lot of different directions to pursue at this Sichuan spot in the Village, the first Manhattan outpost of the popular Flushing dry-pot chain. Behind a glass case are dozens of ingredients, from tofu skin and rice cakes to prawns and from fatty beef to kidneys and liver. Diners can select any assortment, as if this were a bizarre salad bar; products are gathered in a bowl—weighed ($12.99 per pound for meat and seafood, vegetables at $10.99 “per bucket”) and then stir-fried behind the scenes at the desired heat level. Among the composed dishes, the best seller is spicy diced chicken in a sea of chiles and Sichuan peppercorns.  58 E. 8th St.

This closet-sized space (and one of the best options) in Hudson Yards is Momofuku’s vision of a Japanese 7-Eleven that specializes in kimbap, akin to a Korean sushi roll with such fillings as spicy fried chicken, the Japanese omelet tamago, and spicy bigeye tuna—enclosed in rice and a sheet of seaweed. The place also offers sandos, the milk bread sandwiches that might include a chicken katsu cutlet or potato salad with pickled jalapeños. For those who want a crash course in Asian snacks, there are bags of honey butter Calbee potato chips and Pocky biscuit sticks. Shops and Restaurants at Hudson Yards