European champion Real Madrid displaced Manchester United as the world’s highest-earning soccer club as the English team’s under-performance on the pitch in recent seasons ate into its dominance off it.

United slumped to third place, below both Real and Spanish rival Barcelona based on revenue for the 2017-18 season, financial services firm Deloitte said in its annual Football Money League on Thursday. United was the wealthiest club for two of the past three years and eight times in the last two decades.

Clubs in England’s Premier League, which has the highest broadcast revenue, took six of the top 10 spots, but Spain’s two biggest teams prevailed thanks to their prowess in Europe’s elite Champions League and supremacy at home.

The changing of the guard in soccer finance mirrors the contrasting on-field fortunes of Manchester’s “Red Devils” and Madrid’s “Los Blancos” of late. Madrid has won the Champions League, Europe’s most lucrative competition, for the last three seasons. During the same period, United didn’t get past the first round of knock-out games.

United’s annual revenue was also hit by a slump in the pound. It rose 1.5 percent to 590 million pounds ($770 million), though slipped by the same margin to 666 million euros ($757 million), Deloitte said. Real Madrid’s surged 11 percent to 751 million euros.

“To win the Champions League three times in a row is phenomenal and Real is the premium global brand in club football,” said Dan Jones, partner in the Deloitte sports business group.

A spokesman for Manchester United said the club isn’t “too concerned” about financial league tables from year to year and it’s clear the team is a top global sports brand by any measure.

Even so, the Premier League still dominates the money. There are a further three English teams in the top 20, with even struggler Newcastle United making the cut despite not winning a trophy since 1969 and its billionaire owner trying to find a buyer.

London team Tottenham Hotspur, which is waiting to move into a 62,000 capacity stadium, re-entered the top 10 for the first time since 2006-07.

Italian champion Juventus, which signed Real Madrid star Cristiano Ronaldo in the close season, meanwhile dropped out of the top 10 for the first time since 2010-11. Weaker broadcast revenue in Italy relative to other big leagues mean the Turin club needs to do better than rivals in the Champions League to bridge the gap.

Manchester City and Paris Saint-Germain, which are backed by wealthy Middle East owners, are in fifth and sixth place. The clubs are facing claims they have breached the game’s rules that limit spending on players. Both deny any wrongdoing. 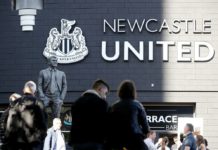