The threat of conflict offered the kingdom a rare opportunity for common cause with Qatar, which it’s shunned since June 2017. Qatar’s foreign minister was dispatched to Tehran with a similar appeal for calm.

“The message from the Gulf to the U.S. is clear: They are telling Trump, ‘Please spare us the pain of going through another war that would be destructive to the region,’” said Abdulkhaleq Abdulla, a political science professor in the neighboring United Arab Emirates. “We will be the first to pay the price for any military showdown, so it’s in our best interest not to see things get out of hand.”

Qassem Soleimani was killed in a drone strike near the Baghdad airport last week, sparking fear in the Gulf that tensions will cascade into conflict as the U.A.E. gets ready to host a world expo beginning in October and Saudi Arabia prepares to hold a meeting of the Group of 20 largest economies the following month.

Soleimani’s killing has met with a mixture of celebration and trepidation in Saudi Arabia, where the U.S. is a key ally and Iran is a rival for regional hegemony. Soleimani was a powerful commander with a crucial role in proxy wars across the region, but Iran has warned countries that side with Washington after the killing that they will “pay for it it.”

An Iranian official told the state broadcaster that three dozen U.S. military bases and facilities are within reach of Iran’s defense forces — the closest being in Bahrain.

The Kingdom’s statement regarding the events in Iraq stresses the Kingdom’s view of the importance of de-escalation to save the countries of the region and their people from the risks of any escalation.

The U.A.E.’s minister of state for foreign affairs, Anwar Gargash, called for “rational engagement,” writing Friday on Twitter that “wisdom and balance must prevail.”

The U.S. strike has restored some of the trust in Washington the Gulf lost after devastating attacks on Saudi oil installations in September, which the kingdom and the U.S. blamed on Iran, elicited little more than harsh words from the Trump administration.

“All of that really caused some concern,” Abdulla said. But Soleimani’s killing proved that “America can be decisive” when “the time calls.”

–With assistance from Zainab Fattah. 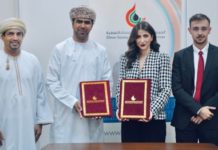