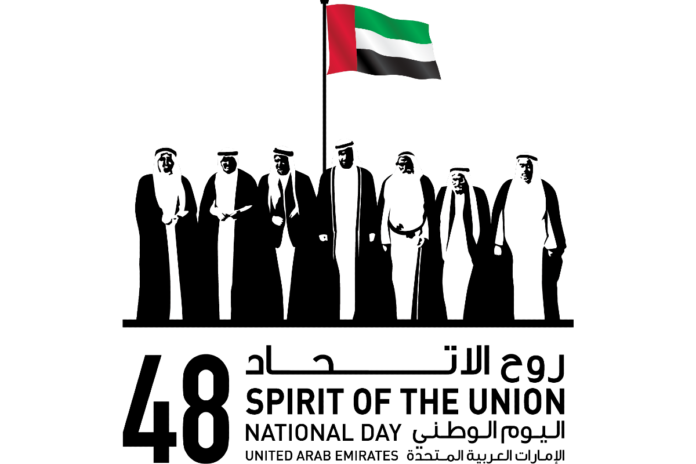 The time has finally arrived. This United Arab Emirates is celebrating it’s 48th National Day today – raising toast to the union of the seven emirates, sharing stories about courage and pride, about people who are resilient and resourceful, honourable and devoted, united and full of faith.

His Highness Sheikh Mohamed bin Zayed Al Nahyan, Crown Prince of Abu Dhabi and Deputy Supreme Commander of the UAE Armed Forces, has said that the UAE is entering the future with “optimism”, and “our belief that we are on the right path has been reaffirmed,” adding in his statement on the occasion of the UAE’s 48th National that the country sets “no limits to its aspirations and trusts in its abilities, potential and unity.”

“UAE’s tremendous progress has been made possible by our unity, effort and great sacrifices.”

“On the 48th National Day we recall the past with its challenges as well as the sacrifices of our forefathers. We look at the present with our current achievements and the future with our hopes and ambitions to know where we stand and where we are heading,” he said while extending wishes.

Read: The stage is set for 48th UAE National Day

UAE President His Highness Sheikh Khalifa bin Zayed Al Nahyan meanwhile said that “education will remain a priority and our path to the future”, adding that the new year’s federal budget has allocated a large proportion to funding federal schools and development projects. He added that the UAE Cabinet has issued a resolution to establish an education support fund, which will enable the community to fund education development programmes that focus on building skills, values, trends and exploring and developing talents, as well as providing a decent life for all citizens.

.@DXBMediaOffice, @DubaiPressClub and @Brand_Dubai wish the leadership, government, citizens and residents of the #UAE a happy 48th National Day, with a future embracing continued success and prosperity for all. pic.twitter.com/1Dv6vSvka6

His Highness Sheikh Mohammed bin Rashid Al Maktoum, Vice President, Prime Minister and Ruler of Dubai, has said that the Spirit of the Union that runs through the people of the UAE, have rendered the word ‘impossible’ void, “and with that, we have turned making achievements to a way of life, and made progress a part of our plans and actions.”

“We will continue to deliver the future for our generations to come. The occasion we are celebrating today is teeming with a myriad of lessons that we have learned from our Founding Fathers, who instilled in us an ambition and will to cope with the changes in the world and to utilise our full potential,” he added.

Wishing the country and fellowmen on National Day, His Highness Sheikh Saud bin Saqr Al Qasimi, Supreme Council Member and Ruler of Ras Al Khaimah, said UAE is a leading model of cooperation and solidarity among citizens through the Union’s experience. “The Union is the main identity that all citizens are proud of, and they are proud of being part of a strong union that is confidently moving forward towards a bright future. The overall development and prosperity achieved, in light of the union of the seven emirates, confirms the importance of this journey, which is an example to follow in the region and the entire world, as one of the most successful federation experiences,” he said.

His Highness Sheikh Hamad bin Mohammed Al Sharqi, Supreme Council Member and Ruler of Fujairah said the transformational development drive ongoing in the UAE “proves that the word impossible does not exist in our lexicon.”

“The Emiratis have made the UAE an international centre of attention and a leading destination, and have won the admiration and appreciation of the international community for their achievements,” he said while referring to Dubai Expo 2020 and the historic space journey of the Emirati astronaut Hazza Al Mansoori to the International Space Station.

H.H. Sheikh Saud bin Rashid Al Mu’alla, Supreme Council Member and Ruler of Umm Al Qaiwain, said on second of December each year, the leadership and the people of the United Arab Emirates celebrate the UAE National Day, which manifested the national will of the founding leaders, and the determination of the loyal sons of the homeland, to promote the concept of the union.