The International Air Transport Association (IATA) announced full-year global passenger traffic results for 2020 showing that demand (based on revenue passenger kilometers or RPKs) fell by 65.9 per cent compared to the full year of 2019, by far the sharpest traffic decline in aviation history.

Furthermore, forward bookings have been falling sharply since late December.

“Last year was a catastrophe. There is no other way to describe it. What recovery there was over the Northern hemisphere summer season stalled in autumn and the situation turned dramatically worse over the year-end holiday season, as more severe travel restrictions were imposed in the face of new outbreaks and new strains of COVID-19,” said Alexandre de Juniac, IATA’s Director General and CEO. 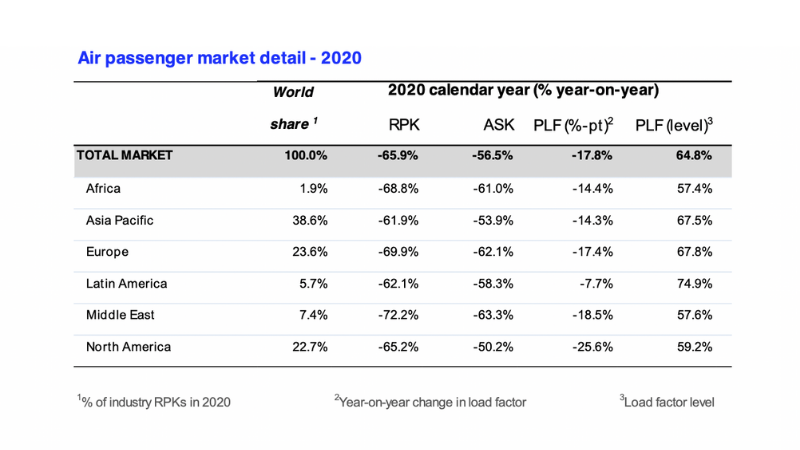 Asia-Pacific airlines’ full-year traffic plunged 80.3 per cent in 2020 compared to 2019, which was the deepest decline for any region. It fell 94.7 per cent in the month of December amid stricter lockdowns, little changed from a 95 per cent decline in November. Full year capacity was down 74.1 per cent compared to 2019. Load factor fell 19.5 percentage points to 61.4 per cent.

European carriers saw a 73.7 per cent traffic decline in 2020 versus 2019. Capacity fell 66.3 per cent and load factor decreased 18.8 percentage points to 66.8 per cent. For the month of December, traffic slid 82.3 per cent compared to December 2019, an upturn over the 87 per cent year-to-year decline in November reflecting pre-holiday momentum that was reversed toward the end of the month.

North American airlines’ full year traffic fell 75.4 per cent compared to 2019. Capacity dropped 65.5% per cent and load factor sank 23.9 percentage points to 60.1 per cent. December demand was down 79.6 per cent compared to the same month a year ago, a pick-up over an 82.8 per cent drop in November reflecting a holiday surge.

Latin American airlines had a 71.8 per cent full year traffic decline compared to 2019, making it the best performing region after Africa. Capacity fell 67.7 per cent and load factor dropped 10.4 percentage points to 72.4 per cent, by far the highest among regions. Traffic fell 76.2 per cent for the month of December compared to December 2019, somewhat improved from a 78.7 per cent decline in November.

African airlines’ traffic fell 69.8 per cent last year compared to 2019, which was the best performance among regions. Capacity dropped 61.5 per cent, and load factor sank 15.4 percentage points to 55.9 per cent, lowest among regions.

Demand for the month of December was 68.8 per cent below the year-ago period, well ahead of a 75.8 per cent decline in November. Carriers in the region have benefitted from somewhat less severe international travel restrictions compared to the rest of the world. 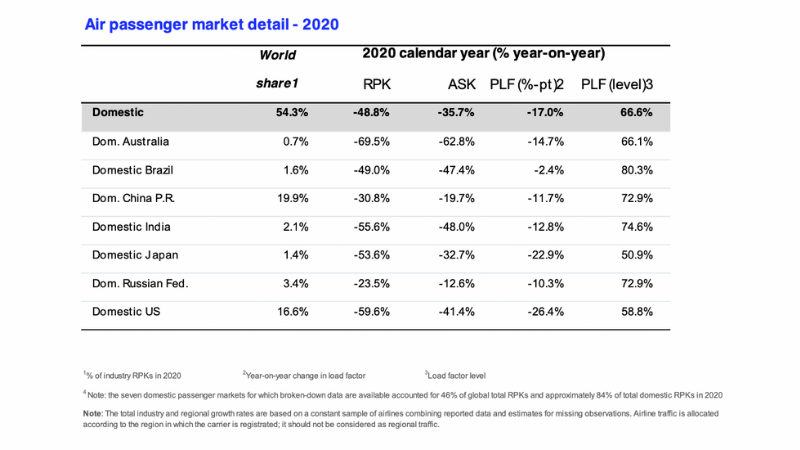 China’s domestic passenger traffic fell 30.8 per cent in 2020 compared to 2019. It was down 7.6 per cent for the month of December versus December a year-ago period, which was a deterioration compared to a 6.3 per cent decline in November amid new outbreaks and resulting restrictions.

Russia’s domestic traffic fell 23.5 per cent for the full year, but 12 per cent for the month of December, much improved over a 23 per cent decline in November. Full-year results were supported by booming domestic tourism over the summer and falling fares.

“Optimism that the arrival and initial distribution of vaccines would lead to a prompt and orderly restoration in global air travel have been dashed in the face of new outbreaks and new mutations of the disease.

“The world is more locked down today than at virtually any point in the past 12 months and passengers face a bewildering array of rapidly changing and globally uncoordinated travel restrictions.

“We urge governments to work with industry to develop the standards for vaccination, testing, and validation that will enable governments to have confidence that borders can reopen and international air travel can resume once the virus threat has been neutralized.

“The IATA Travel Pass will help this process, by providing passengers with an App to easily and securely manage their travel in line with any government requirements for COVID-19 testing or vaccine information. In the meantime, the airline industry will require continued financial support from governments in order to remain viable,” said de Juniac.