(Bloomberg) — More than 120 million workers globally will need retraining in the next three years due to artificial intelligence’s impact on jobs, according to an IBM survey. That’s a top concern for many employers who say talent shortage is one of the greatest threats to their organizations today. And the training required these days is longer than it used to be — workers need 36 days of training to close a skills gap versus three days in 2014, IBM notes in the survey.

Read: The One Job in Banking Robots Can’t Take 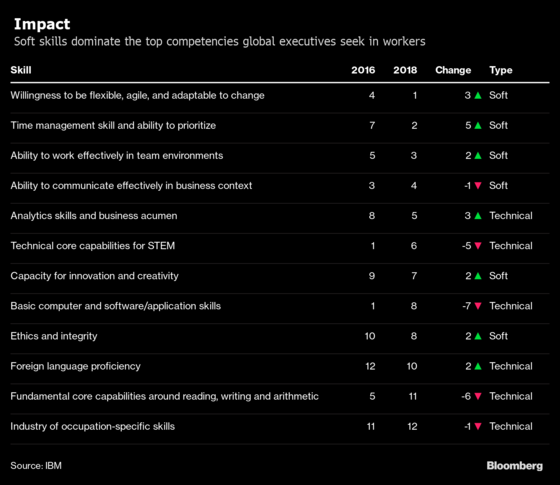 Some skills take longer to develop because they are either more behavioral in nature like teamwork and communication or highly technical, such as data science capabilities.

“Reskilling for technical skills is typically driven by structured education with a defined objective with a clear start and end,” Amy Wright, IBM managing director for talent, wrote in an email. “Building behavioral skills takes more time and is more complex.”

Behavioral skills, such as the ability to work well on a team, communication, creativity, and empathy are best developed through experience rather than structured learning programs like a webinar.

Read: Robots Might Turn Out to Be Great Co-Workers

When employers say they’re facing a skills shortage, the first thing that comes to mind is coding experience or another advanced technical skill set. Yet, today, employers are calling for more emphasis on soft skills like communication skills, ethics and creativity rather than technical, a switch over the last few years, the survey notes. Behavioral skills are now seen as critical from digital and technical capabilities.

Advancements in AI are expected to not only displace jobs but also create new ones. The challenge will be upskilling workers to fill the new jobs. Several ways to close the skills gap include hiring talent from other countries, from outside the organization and moving employees across divisions, says IBM.

An estimated 50.3 million Chinese workers may require retraining as a result of intelligent automation over the next 3 years, according to the IBM study. China is followed by 11.5 million in America and 7.2 million in Brazil. Japan and Germany round out the top 5 countries with 4.9 million and 2.9 million workers, respectively.