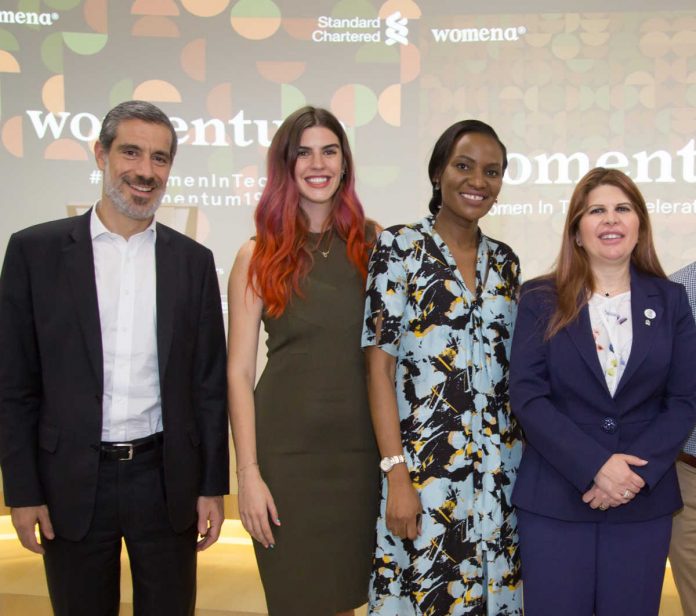 Investing in workplace gender diversity is profitable for organisations, investors, and all stakeholders involved. We now even have research to back this up. Today, women are the most underrepresented in technology-related fields as compared to any other.

But how do we build a more inclusive and diverse tech industry? How do we challenge the status quo and tip the skewed gender ratios?

Standard Chartered’s Women in Tech programme is a promising step in that direction. ‘Womentum’, as it is also called, aims to promote the economic and social development of women entrepreneurs in the UAE through innovation or technology led entrepreneurship.

Read: Men Still Outnumber Women 2-to-1 as Speakers at Conferences

Launched in partnership with womena®, the global programme primarily supports women-led and entrepreneurs in the UAE.

According to a media release, the launch of Womentum took place at the Youth hub at Emirates towers and was attended by the start-up community, womena® bossladies, as well as executives from Standard Chartered including Alex Manson, Global Head of Ventures; Julie Wallace, Global Head of Sustainability, Olga Arara-Kimani, Regional Head of Corporate Affairs, Brand & Marketing in Africa and the Middle East along with Rola Abu Manneh, CEO for the Bank in UAE.

The UAE-based, Womentum is part of a global Women In tech programme initiative that is already live in Standard Chartered New York, Kenya, Pakistan, and Nigeria. The programme will focus on capacity building for women-owned enterprises, target female-led entrepreneurial teams and provide them with training, mentorship and seed funding, stated the release.

All nominated startups will be taken to Berlin and Dubai and provided remote mentorship. It will then ultimately lead up to the Demo Day Pitch in the month of October. In addition to mentorship and world-class curriculum, Standard Chartered and womena® will be giving away a total funding of USD160k to the top winners.

The Accelerator will also be filmed for an upcoming season of the documentary web series under the same name.

“At Standard Chartered, we embrace and celebrate diversity, including gender diversity, and we are proud to launch the ‘Women in Tech’ accelerator in collaboration with womena®. Womentum aims to support, mentor and nurture women-led startups in the region. Our staff and partners are here to mentor the startups, help them scale and equip them with skills that are necessary to thrive in today’s world.”

“womena®’s mission is to promote gender diversity and inclusion and we believe that the next wave of innovation will come from emerging market entrepreneurs – the women of these markets are pivotal in this journey. womena® has built a programme that we felt was lacking in the regional ecosystem focused on female-led start-ups. In the world class curriculum, we envelop all content in perspective-shifting experiences: Taking the entrepreneurs out of their comfort zones and forcing them to look differently, innovatively at their solutions. We are looking to surpass all expectations in 2019 and once again prove that the region is poised to be a global hotbed for tech changemakers.”

”The gender-based divide is still present across all industries. It has been reported that, financial investment received by female-led startups is 49.3% lower* than what is received by male-led startups. As an international bank with a rich history spanning over 160 years in Africa and the Middle East, we are well positioned to address such a gap and we are proud to be partnering with womena® to support female-led startups in developing their enterprises. Women In Tech is one of the key pillars of our Sustainability agenda and we are confident we can make a difference given the overwhelming feedback received from startups through our existing incubators in New York, Kenya, Pakistan, and Nigeria.”