The news sent Zoom shares tumbling, eventually closing with a decline of 6.1% on Friday. Still, the stock managed to gain more than 5% for the week, fueled by a surge in users who have embraced the video-conferencing software for work and socializing while confined to their homes. Zoom’s shares have jumped more than 130% this year, vaulting the company into the ranks of some of the most valuable U.S. companies. At $44 billion, Zoom’s market capitalization is now bigger than nearly three-quarters of the companies in the S&P 500 Index.

Investors have flocked to Zoom with much of the world home-bound to combat the spread of the novel coronavirus. On Wednesday, Zoom reported a 50% jump in users in the past three weeks. Along with Zoom’s success has come headache, with the San Jose, California-based company facing backlash over privacy and security concerns that prompted an apology from Chief Executive Officer Eric Yuan and moves to make the platform more secure.

In a challenge to Zoom, Facebook said the goal of its new video platform, which will allow as many as 50 people per chat, was to offer users a more social and less corporate feel than what’s currently available.

While Zoom already faced plenty of competition before Facebook joined the conversation, the news served as a reminder that the stock had a lot of optimism baked in as several analysts have recently warned. JPMorgan on Thursday said that the current surge in users won’t necessarily result in a similar increase in revenue as many participants are using a free version. Last week, BTIG said Zoom is priced to “perfection” and warned of risks from security concerns.

Zoom’s valuation multiple has soared this year along with its share price. The stock is trading at around 29 times revenue over the past 12 months. That’s more than four times the average of the 96 companies in the S&P North American Technology Software Index. 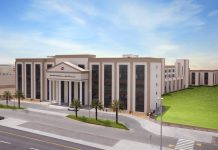