On Tuesday evening the company’s shareholders, banks and bond holders discovered the mind-boggling extent of those alleged debt shenanigans. Instead of the $2.1 billion of debt reported by the United Arab Emirates’ hospital operator last June, the company really has closer to $5 billion of borrowings, its advisers believe.

This is by no means the only ghastly disclosure that NMC has made in recent weeks but it’s by far the most damaging. Apparently some of the money has been used for “non-group purposes,” which explains why instead of swimming in cash, the company seems to have all but run out of it.

NMC’s update confirmed it had met its payroll obligations in February. That this wasn’t self-evident speaks volumes about its precarious financial condition. As recently as last June the company reported $500 million of cash on its now discredited balance sheet.

Needless to say, this is a shockingly bad time for a private hospital operator to suffer a gigantic financial scandal that calls into question its survival. Like most countries, the UAE has registered scores of coronavirus infections.

While it seems likely that the UAE will find the funds from somewhere to bail out NMC and keep its clinics operating, any lingering hopes that NMC shareholders will recoup some value from a takeover look all but shot. The shares are suspended pending full clarification of NMC’s true financial position. NMC’s $360 million, 1.875%-coupon bonds maturing in 2025 are trading at just 22 cents on the dollar — bond-market parlance for “will someone please get me out of here.”

The scale of possible financial misstatements at NMC make recent British corporate scandals such as the one affecting cake shop owner Patisserie Valerie Holdings Ltd look almost quaint. But while the sums are several orders of magnitude larger, similar questions must be asked once again: Why were non-executive directors oblivious, what were the auditors (in this case Ernst & Young) doing and how about the banks?

NMC worked with Standard Chartered Plc, HSBC Holdings Plc, JPMorgan Cazenove and Barclays Plc to arrange financing, as well as local banks. The company’s massively misleading disclosures are as devastating for them as they are for the reputation of London’s capital markets.

Doubtless, those involved will offer up various shades of “how could we have known?” But it was no secret that NMC’s corporate governance was shoddy, and that related party transactions involving the company’s controlling shareholders were extensive. Last year, NMC’s board appointed a special committee to oversee such transactions. Somehow it failed to spot the $2.7 billion in additional debt that NMC appears to be on the hook for.

Even the preternaturally skeptical Block seems surprised by the extent of NMC’s debt omissions. If Muddy Waters is shocked, imagine how minority shareholders feel. 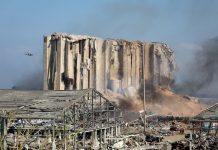