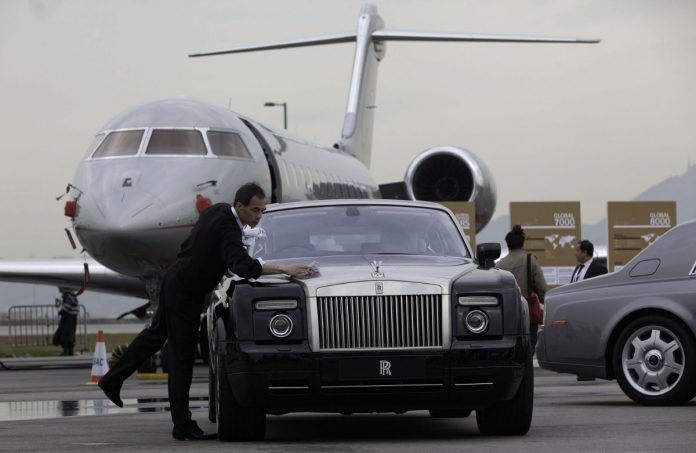 They call themselves the Patriotic Millionaires, and they say with straight faces it’s time the ultra-affluent kick in more to Uncle Sam.

If they’re traitors to their class, they’re certainly proud ones. In this era of gaping inequality, the group of 200 or so millionaires is pressing for a more progressive tax system.

“I’d still have two airplanes,” says one of them, Stephen Prince of Tennessee.

Prominent members include Disney heiress Abigail Disney, Men’s Wearhouse founder George Zimmer, real estate developer Jeffrey Gural, and Chuck Collins, heir to the Oscar Mayer fortune. It takes an annual income of $1 million or at least $5 million in assets to join and, as one might expect, most members are old, white, liberal men.

Many ordinary people agree with them, according to public opinion polls, as do the Democratic candidates for president.

Some Patriotic Millionaires say they signed up because they feel a little guilty about being so rich when they were “born on third base.” Others say they’re looking for a sense of community. Do-good vibe aside, some concede they will still gladly take advantage of tax loopholes.

Bloomberg sat down with some members of the group, which started a decade ago, to find out why they’ve chosen this course. Comments have been edited and condensed.

In 1987, after dropping out of college and bouncing from job to job, Nash co-founded grocery chain MOM’s Organic Market, which now has 19 stores and $230 million in revenue. Nash, who owns 100% of the company, is a millionaire “several times over” and lives in the leafy suburban outskirts of the nation’s capital. He joined Patriotic Millionaires about five years ago.

Why did you join?

If you want a good democracy, where people are protected and certain services are provided like education and military, then you’ve got to pay your flipping taxes. It’s unpatriotic to live here and thrive here and then not pay the bills.

Do you support the wealth tax?

It would probably be difficult to enact and enforce. I’m generally for raising taxes on the wealthy, but whether or not that specific tax is a good way to do that, I’m not sure.

What do you think of the wealth bashing that’s now so common?

Wealthy people aren’t bad. You’re allowed to be wealthy. It’s something to strive for. Anyone is going to wish for a life of ease. That’s human nature. That’s the way capitalism was set up and democracy supports it. There is this backlash against the wealthy from the left, which I think is fairly ridiculous.

Do you have a favorite presidential candidate?

I’m going to vote for whoever the Democrat is. Anyone we have is going to be a billion times better than what we have now.

Pearl retired from BlackRock Inc. in 2014 after a decades-long career in finance that made him a “high seven-, low eight-figure” fortune. Pearl, the group’s chairman and one of its first members, lives on Park Avenue just a few blocks from the Metropolitan Museum of Art.

Why did you join?

So I could actually do something and feel I was a part of something and actually feel like I’m making a difference, as opposed to sending a big check to whomever and getting to meet Nancy Pelosi once a year.

It’s not that I personally want to pay more money. I can give away all my money if I wanted to. It’s that the growing inequality in our country is bad. We’re moving in a direction where there’s a few rich people and lots of poor people. That will lessen the possibility of having a middle class of storekeepers and professionals and doctors and lawyers and people like that who really are the bedrock of our economy.

It doesn’t take the place of government funding. It’s not that hard to raise money for a new music hall at Lincoln Center. It’s much more difficult to raise money to build a new sewage treatment plant at 143rd Street.

Simmons, a long-time Bay Area resident, retired almost 20 years ago as vice president of corporate development for a computer storage company and became an angel investor. He won’t say how much he’s worth because his wife would “freak out,” but said he has “well over $5 million.” He lives in a Silicon Valley suburb and joined the group soon after Donald Trump was elected president in 2016.

Why should rich people like yourself pay more taxes?

We have to fund programs to bring the bottom up and even some of the middle class needs help and that’s going to take a lot of money. We’re the ones who can afford it. I’d much rather live in a country that has much more equality and have my net worth reduced—it doesn’t change my lifestyle.

How would you do it?

I think the top rate can be higher on me and others. We’ve had it well over 70% before and survived as a country. At least it could be somewhere between 50% and 70%. And tax capital gains at the same rate.

What would you want the extra money spent on?

Universal Medicare. We have to admit the areas where capitalism doesn’t work, and medicine is one. Education is another.

Prince developed many of his political beliefs growing up in the small town of Waycross, Georgia, during the Civil Rights era. He’s since started various businesses—a plastic card printing business, computer imaging business—and built a $40 million fortune, including about $25 million in cash from two stake sales last year. He spoke by phone while vacationing on the Big Island of Hawaii.

How did your childhood influence your political views?

I was very supportive of the Civil Rights movement as a kid. I was pretty rare in that regard, being a white kid from the South. I mean most of my friends were racist and had no desire whatsoever to balance the ground. For some reason, I came out on the other side of that.

Do your friends and family agree with you politically?

Most of my friends are pretty conservative—fiscally conservative and socially conservative. They frown and shake their heads at how I can see things the way I do. And I’m equally astounded that they feel the way they do.

If the tax laws were changed in a more fair fashion, sure I would’ve kept a smaller amount of the transactions we executed last year, but I’d still be OK. I’d still be able to take vacations and I’d still have two airplanes.

Which tax ideas do you support?

We have to have something like a wealth tax. But it’s not enough for just individuals to do so. Corporations have got to start paying more taxes.

Stewart, a certified financial planner, grew up middle class in Santa Maria, California, to parents with eighth-grade educations. After years of real estate investments, she has $4.8 million, two homes, just got back from a trip around the world and has decided she doesn’t “need any more.”

Why should the wealthy pay higher taxes?

Why do you use some of the tax loopholes that you complain about?

I will continue to take advantage of everything there is because everybody else is, too. There are 10 to 12 million millionaires in this country and there are only 200 of us so what difference can we make?

Do you favor a wealth tax?

Absolutely. Do you own a home? Do you pay property tax? That’s a wealth tax.

Who are you planning to vote for?

Elizabeth Warren. She’s got policies that you could imagine appeal to me.

(Michael Bloomberg is also seeking the Democratic presidential nomination. He is the founder and majority owner of Bloomberg LP, the parent company of Bloomberg News.)