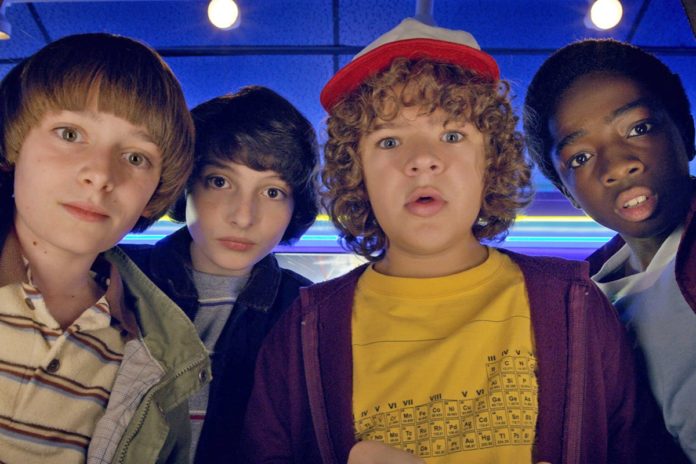 (Bloomberg) — Days before the July 4 holiday in the U.S., hundreds of fans of “Stranger Things” lined up along the beach in Santa Monica, California, to attend a fair modeled after the Netflix Inc. show.

Clad in shirts with the names of characters and the high school in fictional Indiana, they waited more than an hour to ride a Ferris wheel, eat ice cream and snap selfies in a photo booth.

Read: These Netflix Shows Should Be On Your Radar Pronto

The event, one of two in the U.S., is part of the biggest marketing campaign ever undertaken by Netflix, the world’s largest paid online TV network. Over the past few weeks, Netflix has attached “Stranger Things” to Schwinn bikes, Nike shoes and Coke soft drinks — all to hype the Independence Day arrival of the show’s third season.

On Monday, Netflix begins a long promotion with Microsoft Corp. The tech giant is bringing back Windows 1, the first version of the software that made it the most valuable company. The app includes Microsoft Paint and the word processor Write, as well as games and videos from “Stranger Things.” The show is set in 1985, the same year Windows 1 was released.

Like any campaign, this one is designed to draw in current fans and attract potential new ones. But it’s also an important test of whether Netflix can turn “Stranger Things,” already its most popular original show in the U.S., into something much bigger. The company, with worldwide subscribers approaching 160 million, is beginning to angle for a piece of the $122 billion consumers spend on entertainment-linked merchandise.

“The category is massive, and Netflix wants to play a part,” said Gene Del Vecchio, a consultant and adjunct marketing professor at the University of Southern California. “They are going to need a strategic plan if they really want to reap the benefits as they go forward.”

The world’s largest entertainment companies are built on properties like “SpongeBob SquarePants,” “Star Wars” and “Batman” that remain in the public eye via T-shirts, games and toys long after people stop watching the latest season. “Star Wars” has generated more than $20 billion in merchandise sales — a virtuous cycle in which T-shirts and action figures drive ticket sales for each new movie.

For all of Netflix’s success, it has struggled to dispel industry criticism that it churns through projects, never giving a show more than a few weeks in the spotlight. The Los Gatos, California-based company cancels the vast majority of new series after just a couple seasons because viewership falls off. Sustaining interest is the key if Netflix wants its shows to sell toys, clothing and video games.

“Stranger Things” debuted over the July 4 weekend in 2016 with little fanfare. A quirky piece of nostalgia for the 1980s, the show was created by two brothers without a hit to their name and a cast full of kids and journeyman actors. The creators were initially concerned because they saw few billboards or traditional marketing materials.

Viewers showed up right away. Within weeks, the cast was on magazine covers and talk shows. The show was nominated for Emmy awards, and was, by outside estimates, one of Netflix’s most-watched original series.

“Whenever we do survey work, it’s the No. 1 show in terms of customer favorites,” said Michael Nathanson, an analyst with MoffettNathanson LLC.

“Stranger Things” proved Netflix could make a hit on its own. Unlike “House of Cards,” “Orange Is the New Black” or “The Crown,” the show was produced without the help of a major studio. It is also the kind of hit media companies dream about. It appeals to all ages, and lends itself to costumes and toys. But Netflix didn’t even have a licensing department when that first season appeared.

In September, Netflix hired Disney veteran Christie Fleischer to lead its consumer products group. She, in turn, has beefed up the group with additional hires from Disney.

While Netflix has a huge head start on traditional media companies in streaming, Disney is still the model for a modern entertainment company. Every new TV show or movie at Disney is the start of a franchise that makes money in a multitude of ways.

“Frozen” generated $531 million in toy sales in the U.S. in 2014, according to research firm NPD Group Inc. “Star Wars” is a video game, theme-park attraction and toy juggernaut.

It’s an open question whether Netflix can develop shows that deliver those kinds of sales. Internet TV is still in its early days, and the company debuts whole series all at once, making it harder to sustain the attention of viewers the way a weekly program might.

“The shows get big buzz and then start to fade,” said Allen Bohbot, who produces the kids’ show “Super Monsters” for Netflix. “With TV, the show is on every day and repeats every week. There is a constant in-your-face reminder to a kid that a show will be there.”

He can speak first hand. Netflix bought the underlying characters from “Super Monsters” and licensed Hasbro Inc. to produce a line of toys. The toys didn’t catch on in a big way, and a more ambitious release schedule for the show didn’t seem to help.

None of those concerns have stopped some of the world’s largest companies from working with Netflix and “Stranger Things” to reach new customers.

“We’re always out looking for things we can do to drive and build cultural relevance,” said Eli Friedman, Microsoft’s general manager of brand marketing. “There’s lots of buzz around the show.”

Shares of the streaming company have risen 41% this year, compared with a 19% gain for the S&P 500 Index.

The promotion with Microsoft will last all summer. The software giant will produce a video game rooted in “Stranger Things” and offer science camps at its U.S. stores all summer, named after the “Camp Know Where” in the series. Technophiles will be able to take science and engineering classes at more than 80 stores in the U.S., and learn how to make a minigame tied to the series.

Fleischer has been laying the groundwork for the “Stranger Things” promotion for months, and, for the first time will roll out products worldwide, including Latin America, Asia and Europe.

The company is developing campaigns for “Dark Crystal,” a series based on the Jim Henson characters, “Klaus,” an animated movie, and “La Casa de Papel,” a Spanish heist show, according to people familiar with the company’s plans who asked not to be identified. In 2020, a Finnish video game company will release a mobile game based on “Stranger Things.”

Bohbot, who produces “Super Monsters,” believes Netflix will ultimately figure out how to turn its online hits into merchandising bonanzas.

“Nickelodeon was nothing until SpongeBob came along and became a hit,” Bohbot said.