(Bloomberg) — Drip by drip, the oil producing countries of the Middle East are watching their share of the global crude market drain away. U.S. production is soaring and shows no sign of slowing, while climate change concerns and advancing clean energy technology could put a cap on demand by the middle of the century. The need for Middle East countries to diversify their economies away from oil has never been stronger.

The OPEC members of the Arabian Peninsula (Saudi Arabia, the United Arab Emirates, and Kuwait) have traditionally borne the brunt of the group’s attempts to balance oil supply and demand, and that’s not changing. Not only do their high production levels mean that they’re asked to make the biggest cuts in volume but they’re also the countries that have the best record of honoring their pledges. Iran and Iraq, the other two Middle East OPEC members, have a patchier record of adhering to their production targets.

The latest round of supply management, which began in January, has seen this pattern repeated. Saudi Arabia, the U.A.E., and Kuwait shouldered more than 60 percent of the agreed cut from OPEC countries. In the first two months of the deal’s implementation, they accounted for 85 percent of the actual cuts made by the OPEC countries. 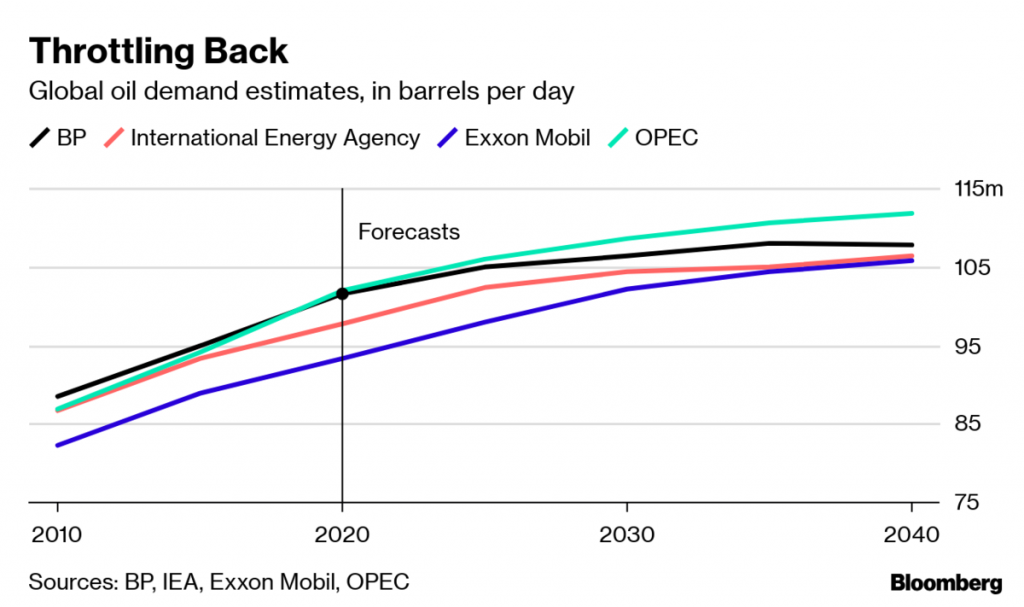 If the short term looks challenging for Middle East oil producers, the longer term is even more daunting. There is a growing consensus that growth in world oil demand will slow to near zero sometime in the first half of this century. Opinions still differ widely on when that might happen, but countries sitting atop proven reserves that will last many decades at current rates of production should be concerned. The idea that some of their oil may never be produced changes the entire valuation of reserves in the Middle East. The traditional argument that oil reserves in the ground would become more valuable as demand kept growing and other supplies dwindled has been turned on its head. Some of those reserves may end up having no value at all.

A steady rise in the price of oil can no longer be taken for granted, and this may change the calculation of whether to conserve or produce more quickly the huge volumes of hydrocarbons locked beneath the sands and seas of the Middle East. One way of accelerating oil production would be to open up the upstream oil sector (exploration and production) to foreign investors. This has been extremely successful in Iraq, where production has doubled since 2010, following the awarding of contracts to rehabilitate fields in the south of the country to consortia of foreign companies. The U.A.E., too, has relied on foreign investment to supplement the state oil company’s activities.

The situations in Saudi Arabia and Kuwait are rather different, though. “There is no intention whatsoever to chip away at Aramco’s exclusivity and its concession,” Saudi Energy Minister Khalid Al-Falih told reporters in January when asked whether the opening up of the state-owned oil company Saudi Aramco to international investors would extend to upstream oil and gas assets.

Foreign participation in the Saudi oil sector is too easily portrayed by opponents as a return to the pre-nationalization era of the 1950s and ’60s. Back then the oil industry was controlled by foreign companies that had been granted concessions covering vast swaths of the country and lasting for decades. It was the conflicts between governments and foreign oil companies over revenue and control that led to the formation of OPEC in 1960.

In Kuwait, the government plans to bring foreign investors into the upstream oil sector have faced parliamentary opposition for decades. In 1998 the government invited foreign oil companies to invest in Project Kuwait, a $7 billion plan to expand production out of five oil fields in the north of the country. Twenty years on, Project Kuwait remains unfulfilled.

The government opted for an operation service agreement model for Project Kuwait—one that would give the companies a risk-and-reward element but wouldn’t contravene Kuwait’s constitution, which forbids foreign ownership of natural resources. The government’s hope to avoid the need for parliamentary approval of the project once the terms had been approved was dashed when the National Assembly decided in late 1998 that it intended to have a direct say in any opening of the oil sector to foreign investors. The stage was set for what has become a protracted wrangle between government and parliament over the project.

Opponents of Project Kuwait argue that the country’s state-owned oil company, Kuwait Petroleum Corp., has the capability to develop the fields on its own and that the presence of foreign oil companies for the 20- or 30-year duration of the contracts would breach Kuwait’s constitution. There was also deep suspicion among some in parliament about how foreign companies have been selected, with allegations ranging from a lack of transparency on the part of the government to accusations of rampant corruption.

As the oil-rich countries of the Middle East seek to diversify their economies, these principles of resource nationalism remain prominent in Saudi Arabia and Kuwait, closing off a source of inward investment and potential employment in those countries. Meanwhile, attempts to diversify these economies seem to revolve around using more of the crude they pump by refining it into fuels or petrochemical products, or investing sovereign wealth funds outside the country. The first isn’t diversification, and the second, while it may generate income, provides little benefit in terms of domestic employment. True economic diversification still seems a long way off.