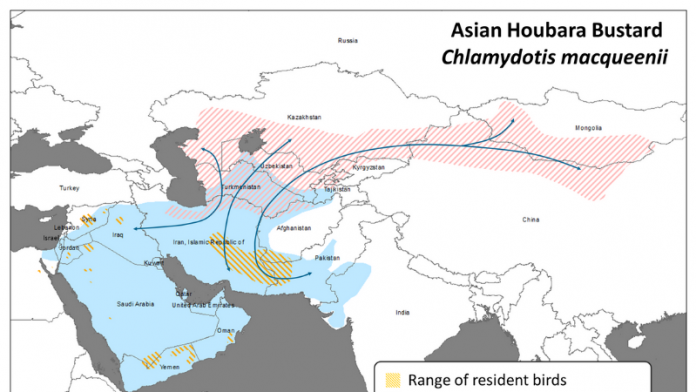 Abu Dhabi: The International Fund for Houbara Conservation has signed a ground-breaking five-year Memorandum of Understanding (MoU) with the Israel Nature & Heritage Foundation.

The breakthrough MoU will see IFHC and INHF, a voluntary association founded to protect and conserve Israel’s nature, landscapes, and heritage sites, collaborate over the next five years on the conservation of the Houbara bustard and other rare and threatened bird species in the country.

It follows the normalisation of relations between the UAE and Israel with the signing of the Abraham Accords Agreement back in August 2020.

“Under this landmark agreement, INHF will benefit from IFHC’s substantial knowledge on the biology, behaviour and population dynamics of the Houbara bustard and other vulnerable species and its expertise in the restoration and preservation of habitats and ecosystems,” said Major General Vilnai.

“Working in coordination with the Israel Nature and Parks Authority, we will now together prepare and implement programmes for effective Houbara conservation within our country.”

The MoU signing means the two parties will now begin collaboration on research, conservation, and restoration activities on agreed rare and threatened species in Israel.

“This is a momentous accord for IFHC, allowing us to cooperate with experts in a country that is an intercontinental bird migration junction and where great conservation efforts are being undertaken,” said H.E. Al Mansouri.

“In our drive to foster greater global dialogue and cooperation on conservation we are honoured to share IFHC’s years of scientific research and excellence in the field with our fellow committed conservationists in Israel.

Our organisations will immediately begin working together to identify, assess, document, and present potential projects. We anticipate our collaboration delivering a significant boost to the conservation of rare and threatened bird species within Israel and to the international bank of scientific conservation knowledge.”

Israel is home to resident Asian Houbara mainly observed in the Negev desert. The agreement will involve field studies and research aimed at preserving the Houbara population and its habitat in the region.

Such studies will include monitoring wild populations to assess survival, dispersal, and breeding success. Feasibility of both in and ex-situ conservation measures will be explored by both parties.

IFHC will continue leading efforts to rebalance wild Houbara populations across the range countries through its successful breeding and release programme that has so far bred more than 553,119 Houbara and released 375,383 plus birds into the wild since inception.